The diary of Harold Collins: “I have seen dead men laying about by the 100”

On Anzac Day, we dive into the diary of Jewish Australian soldier in the First World War, Harold Collins. Excerpts from his time in Gallipoli, and the stories he shared at family Friday night dinners, tell us more about why he chose to serve and his experiences of war.

We don’t know what motivated Harold Collins to enlist in the First World War. His family suspects it was to escape his alcoholic father combined with a desire for adventure. Perhaps it was for financial reasons. As one of 10 children, he started work at age 13 to support his family and throughout his service he sent his pay home to his mother. While likely a combination of all, it may well have been his sense of adventure that was a major driving force.

Harold Collins was keenly interested in the world around him, as the vast archive of photographs, diaries and notes attest to. They leave us with a vivid portrait of what it was like to serve: from the training camps in Egypt, to the shore of Gallipoli and to the muddy battlefields of Western Europe. 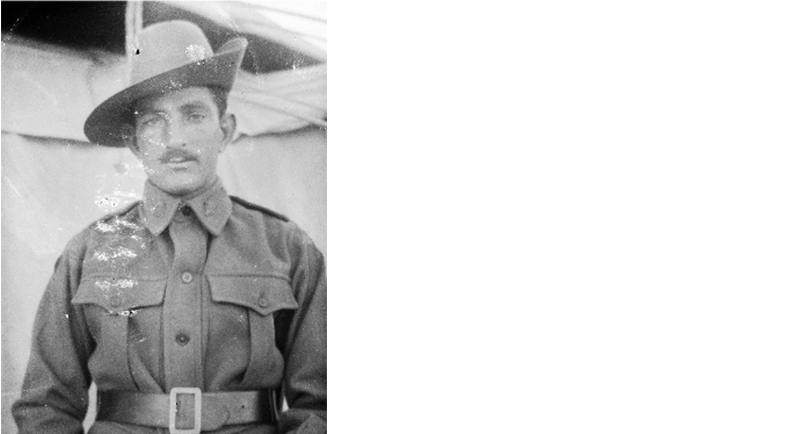 It was his experiences at Gallipoli that he spoke of most extensively. These memories became a feature of his family’s Friday night dinners. Collins was amongst the first wave of Australian servicemen landing at Gallipoli on 25 April 1915.

His diary records the landing:

“…left Isle of Lemnos Saturday night or should I say 1.45 Sunday morning 25 April 1915 and arrived a Gallipoli Peninsula 6’oclck. Landed under shrapnel fire. The 3rd Brigade landed first and charged the hill occupied by the Turks, driving them back about 2 miles….we the AMC had to work very hard. We had no sleep for 3 days and nights. The beach was our hospital. We were putting the wounded on to the boats as fast as we could carry the stretchers…I think we took great risks from the shrapnel for fetching men from the firing line….” The ANZACs quickly entrenched themselves. Despite the difficult conditions, Collins’ diary reveals an optimistic man that could make the best out of any situation. He describes the little dugout he occupied as a ‘nice little place all to myself’, combined with bully beef, biscuits, cheese, jam, onions – ‘what more could one want.’ The detail and care he takes to describe his surrounds allow us a glimpse into what life was like:

“I have a very snug dug out to sleep in, it is dug like a trench with one end and 3 waterproofs for a roof, plenty of leaves and grass to lie on and 3 overcoats to cover me up, a little shelf above me, also a ledge for a candle and to hang my watch and a peg to hang my cap, is it any wonder I sleep so well and only for the noise of the guns and heavy artillery I would think I was camping….

The Turks having a gun on our right flank it made my dugout open to shrapnel fire so I put a sandbag roof on it and as soon as I had finished they started firing again but my dugout has so far proved effective.” Collins was a larrikin and enjoyed a good yarn with his mates. Camaraderie was important to him and continued to be throughout his life.

“While 4 of my mates were having their dinner a shell fell into the middle of them knocking their billy of tea sprawling. It was a very lucky escape for them. I was beside them cooking my stew. If it did not lob on to their table in all probability it would have struck me, but we did not take much notice of it as we are getting used to it, they only joked about it saying how rude the Turks were and that they would put in a complaint about it.”

Despite his good humour, the reality of war could not be escaped and permeates his writing. Harold wanted an accurate account of what life was like and did not shy away from detailing horrific experiences, often recording specific incidences.

“While our squad was bringing a patient down, we had to go across an open space.  The Turks evidently could see us and they sent 6 shells after us. We had to run for our lives. God knows how it is that we were not hit. As we ran the shells would follow us. The poor beggar we had must have suffered as we ran with him. He was shot through the eye and is came out his left jaw so it will give you an idea of how he suffered.  He was conscious all the time…”

Two weeks prior to the evacuation, Collins suffered a hernia and was evacuated to a hospital in Cairo. One can image the toll the months on the peninsula had on his body.

A special item amongst the many things donated to the Sydney Jewish Museum is a program of the first Anzac Day held in Cairo, on the back of which Collins records some of his impressions. For those who had served, who knew personally the fallen and bore witness to the events it was a particularly moving occasion. Afterwards, a sports carnival was held to boost morale.

“They opened up with the Dead March in Saul. I have never heard anything so impressive in all my life, when the small drums rolled out followed up by the clap of the heavy drums when that was finished they play the first verse of the National Anthem when the people in the crowded auditorium rose and sang with the music.” 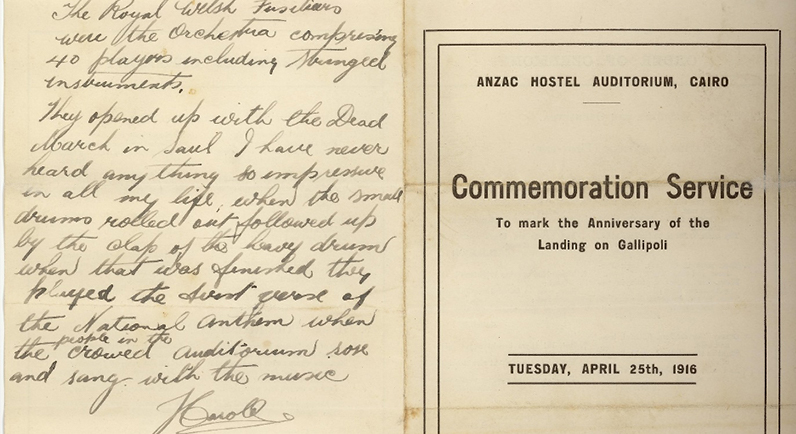 While recuperating from injury, Collins enlisted in the Australia Flying Corps and was sent to the western front where he served for the remainder of the war. He was awarded numerous decorations including: Meritorious Service Medal, 1914-15 Star, British War Medal, Victory Medal, Somme Medal, Albert Medal, Croix Combattant de L’Europe and Anzac Medal.

Harold Collins was the last living Jewish Gallipoli veteran. He died in 1992, just shy of his 100th birthday. On the 105th anniversary of the ANZAC landing on Gallipoli we remember him and all those who have served.