“Six million of our people live on in our hearts. We are their eyes that remember. We are their voice that cries out. The dreadful scenes flow from their dead eyes to our open ones. And those scenes will be remembered exactly as they happened.” — Shimon Peres

Honouring the memory of six million

The Sydney Jewish Museum’s Sanctum of Remembrance is a quiet space for reflection that is dedicated to the commemoration of the six million Jewish people who were murdered in the Holocaust, those who survived and have since perished, and those who took measures to save Jewish lives.

The Sanctum of Remembrance is a place to honour those without a physical gravesite by laying a plaque, and a place for collective commemoration. Each year prior to Rosh Hashana, the Jewish New Year, the Museum conducts a special memorial service where each name in the Sanctum is read aloud and a memorial prayer is recited. History of the Sanctum of Remembrance

The Sanctum of Remembrance was opened in 1992 in conjunction with the Australian Association of Holocaust Survivors and Descendants. The initial Sanctum had space for the laying of 100 plaques. Ten years later, in 2002, the Museum expanded the Sanctum to accommodate a growing number of requests to honour Holocaust victims.

Currently, the Sanctum of Remembrance holds close to 500 plaques dedicated to individual survivors and victims, to entire communities and families, and to extraordinary individuals who saved Jewish lives at the risk of their own lives.

There is still room for descendants and the next generations to lay plaques in memory of loved ones.

For more details on plaque materials, logistics and wording, please click below for answers to some frequently asked questions.

For more information or to organise a plaque dedication, please fill out your details below and we will be in touch. Alternatively, you can call the Museum on 9360 7999. 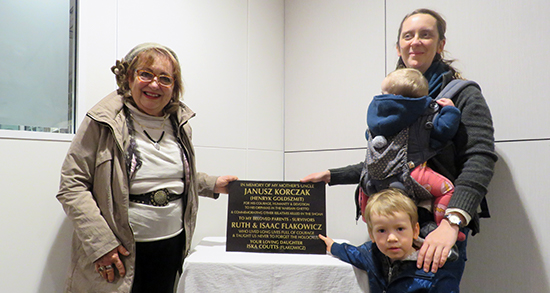 Descendants of Janusz Korczak dedicating a plaque in his honour, 2018.

Merciful God, have in Thy keeping
The millions of precious souls,
The victims of the Holocaust.

Give strength to the Survivors,
The witness of death
And of new life.

Preserve Thy world from nightmares;
Make it safe for the dreams of goodness.

And bless the Righteous Among the Nations,
Who acted justly in a world eclipsed by evil.

Poem read by Rabbi Raymond Apple at the opening of the Sanctum of Remembrance, 1992.