Bordered by blue tape and creased by decades of history, the birthday cards given to Jacqueline Dale (nee Feldman) on the occasion of her 14th birthday remind us that as war tore families apart, it also forced some together. One of these precious relics, donated to the Sydney Jewish Museum in 2003, depicts an ice-skating girl in red and reads “I certainly am not giving you much but I hope it pleases you” in cursive French. In touching paper, the vibrant pencils that Jacqueline’s friend in the orphanage used to colour her card also touch us.

Jacqueline was born in Paris on 18 January 1931 and split her education between French public school and Jewish school in her youth. Her father, Icek, served in North Africa with the French Foreign Legion until 1940. A year later, upon returning to France, he was arrested by French authorities and deported to Pithiviers Internment Camp. A year after that, he was deported and murdered at Auschwitz.

Meanwhile, Germans visited Jacqueline’s apartment to send her family to a camp, but they managed to hide. Jacqueline’s mother Pessa fled to the Zone Libre in France, working on a farm as a maid, and Jacqueline was sent to De l’ecole Du Couret, a French orphanage in Poulouzat, by a children’s aid organisation. Six years her junior, Jacqueline’s brother Charles was sent to a nursery, but he reunited with his sister after the orphanage was invaded by Germans.

From 1943 to 1945, the siblings stayed at a Catholic orphanage in the Haute Pyrrenees region of France, where they hid their Jewish identity. It was at this Catholic orphanage that Jacqueline was gifted the hand-drawn birthday card of a red ice-skater. Here, her surrogate family of nuns and children celebrated birthdays to maintain a sense of normalcy in a period when that seemed impossible. 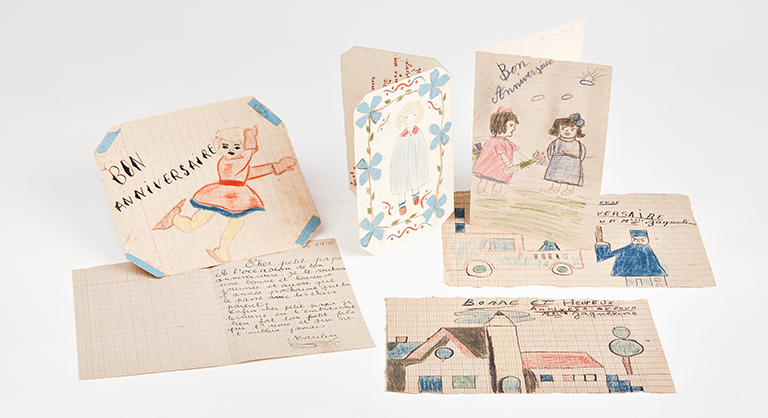 After the war, Jacqueline learned to sew at two chateaus, which set the path for her factory job in Paris upon her return.

In 1949, at the age of 18, Jacqueline migrated to Australia with the aid of the same children’s aid organisation that had sent her to an orphanage years ago. She married Louis Pakula and together had two children: Rina and Irwin. She later married again to Anthony Dale, and her mother joined her in Australia in 1977. Her past, a child amid war, led her to join a Child Survivor group.

Such calls to the past ensure we never forget the humanity of those who were touched by violence, along with their loved ones. This card, however delicate its paper, tells us the story of a girl whose fourteenth birthday persisted despite the ravages of a war that had killed her father. The author of this card, an “Yvette”, ensures as such by writing “Receive this from a friend who loves you and will never forget you.”

Though the tides of history threaten to distance us from our collective pasts, mementos like Jacqueline’s birthday card bridge that temporal gap and remind us of our common humanity.