Jewish Kapos played a pivotal role in the history of the Holocaust. Imprisoned in concentration camps, Kapos were enemies and victims of the Nazis; they were Jewish inmates who were forced by the Nazis to serve as “stand-in” guards. In effect, being a Kapo blurred the lines between collaborator, perpetrator and victim.

The story of Kapos leads us to what Primo Levi has termed the “grey zone” of the Holocaust. It was a ravaged landscape in which Jews, fighting for survival, faced many moral-ethical dilemmas and “choiceless choices”.

Much has been said about Kapos in Nazi documents, survivors’ testimonies, court records and scholarly works. Yet, there are many questions that remain unanswered. 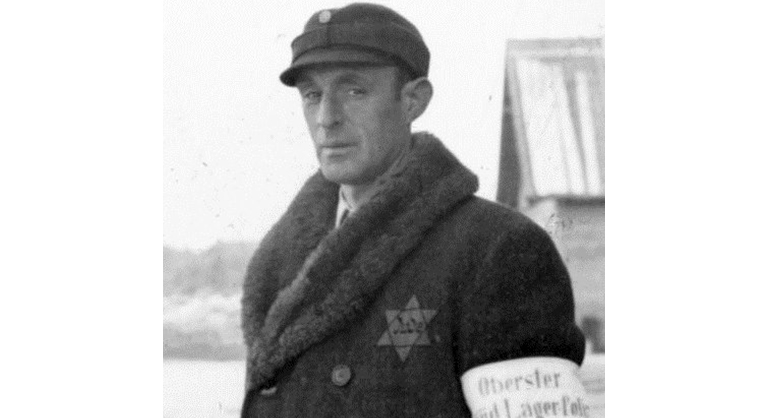 The origin of the word

Who introduced the word Kapo into the German language – when and where?

The origin of the word Kapo remains a mystery. All explanations are mere speculations…

It is widely thought that the word derives from the Italian ‘capo’, meaning head, boss, leader. Italians, hired for road construction work in Bavaria, may have brought the word to the Dachau concentration camp.  Set up in early 1933, this camp served as a model for all subsequent camps.

There is a French connection – to ‘carporal’, corporal. The first prisoners in Dachau were lined up in military formations – in ‘Korporalschaften’, corporal’s commands or squads.

There is a bizarre reference to a Yiddish word ‘Khappers’; the Czarist kidnappers who in the 19th century hunted down Jewish boys attempting to evade the compulsory military conscription.

Heinrich Himmler, the Reichsführer of the SS, spoke bluntly about Kapos. In his speech to the Generals of the German Army on 21 June 1944, he praised the Kapo system and emphasised its significance and success.

Recruiting and deploying an army of Kapos was a cost-saving measure. Only a small number of SS men was required to oversee an ever-increasing camp population. Also, it drove a wedge between inmates, turning groups against groups and victims against victims. The strategy of ‘divide and rule’ paid off. What had been initiated in pre-war concentration camps was practised in ghettos following the outbreak of World War II; members of the ‘Judenräte’, Jewish Councils, Jewish policemen and agents of the Gestapo were forced to assist the Germans in implementing the program of the Final Solution.

Kapos were officially classified as ‘prisoner functionaries’, taking over supervisory positions within the so-called ‘prisoner self-administration’ of the camps. Kapos were categorised in hierarchies, from Head Kapo to Kapo down to Junior Kapo. First and foremost, they were in charge of ‘Arbeitskommandos’, which were labour details that were deployed outside the camp. They also controlled the work of inmates within the camp barracks – in kitchens, laundries, sick bays, store rooms, offices and other facilities.

“We organised our system of control over these sub humans… One prisoner is the overseer of others, if you like, with the responsibility for 30, 40 or even more than 100 other prisoners… He is responsible for meeting the work target, for preventing any sabotage, for seeing they are all clean and that the beds are set up. You soldiers would be pleased with this lot. A new recruit in any army barrack could not be more spick and span”.

Initially, Germans and Austrians were appointed as ‘prisoner functionaries’. Most of them were selected from the ranks of the ‘career criminals’, marked with a green camp badge. It did not take long before the political prisoners, wearing a red ‘Winkel’ (triangle), managed to occupy important positions within the prisoners ‘self-administration’.  With the rapid expansion of concentration camps and the rise in the number of prisoners, non-Germans were recruited to control day-to-day life in camps. Even Jews and women were granted the “privilege” of serving as Kapos.

“I can say quite candidly that it is not my job to featherbed anybody but to rid the streets of sub humans and use them to bring us victory. That’s my task and I keep it in view. Camps hold the lowlifes from all the European nations: Jews and Russians and Poles and Czechs and Frenchmen. Wherever criminals are found in the territories under German occupation, they are sent to us. Because we can’t get by with Germans only, we naturally arrange things so that a Frenchman is a Kapo in charge of Poles, or a Pole in charge of Russians, so that a nation is played off against another.”

No document discloses the number of ‘prisoner functionaries’. Around 4 million men, women and children passed through concentration camps, of which about 10% might have assisted the SS in running the camps. At the end of 1938, some 11,000 prisoners were incarcerated in Buchenwald,  where over 500 served as Kapos. In early January 1945, over 700,000 Jews and non-Jews were still alive in concentration camps, among them perhaps 70,000 Kapos. Most of them survived the war. With few exceptions, they were never held accountable for the services they had rendered.

Kapos were rewarded for their work. They were granted privileges. They received better food, clothing and housing. Wearing a distinct armband displaying their status, they were spared hard labour and harsh treatment. They enjoyed better hygienic conditions, which in turn offered a layer of protection against rampant diseases. Kapos had easier access to flourishing black-market activities and corrupt dealings. Most importantly, power and privileges promised a chance of survival, provided they fulfilled the expectations of their SS masters.

Many Kapos very quickly gained the reputation of brutal supervisors, beating, denouncing and even killing fellow inmates. Physical and sexual abuse were commonplace. Needless to say, this was not true of all Kapos. Some used their positions to support and protect, even to save the lives of others. If they were caught doing this or unable to perform their duties, they were dismissed, punished and henceforth treated as ordinary prisoners.

“A Kapo gets special privileges. The minute we are not satisfied with him he stops being a Kapo and goes back to sleeping with others. He knows only too well that they will kill him on the first night”.

Upon liberation a few Jewish Kapos were attacked, some even killed by survivors. Other revenge-killings were carried out, mostly by former partisan fighters. They targeted Jewish Council members, Jewish policemen and Gestapo agents. In Displaced Persons camps and Jewish communities ‘Honour Courts’ were set up to investigate and pass judgement on these collaborators. A handful of Kapos were sentenced in post-war trials.

The word Kapo haunted survivors, and continues to today. The word was commonly used as a slur or as an insult. Wherever survivors rebuilt their shattered lives, some blamed others of having been a Kapo. Shocked and deeply hurt, a few went to court to obtain a writ preventing the dissemination of the accusation.

In 1950, after the birth of the Jewish State, the Israeli Parliament passed the Nazi and Nazi Collaborator Punishment Law (NNCPL). It enshrined not only the charges of ‘war crimes’ and ‘crimes against humanity’ but also a new legal code: ‘crimes against the Jewish people’. Over a period of two decades, 40 trials were conducted in the district court of Tel Aviv and the Supreme Court in Jerusalem. Two thirds of the accused were convicted, sent to jail from ten days up to six and a half years. One death penalty was handed down, but was rapidly overturned. Most of the trial records have been placed under strict lock and key, sealed for a period of 70 years. In the wake of the highly controversial Kapo trials, especially against the backdrop of the Eichmann tribunal, the view on Kapos shifted. Initially seen only as evil collaborators, traitors and co-perpetrators, they are now also viewed as victims of Nazi terror.

The question has often been asked, who can or should pass judgement on Kapos – survivors, courts of law, or all those who after the Holocaust have sought to understand these tragic figures?

“Jewish Kapos, Judenrat members and Jewish policemen were not on the side of the Nazis. But the cruel and heartless among them must still be judged, if not in the court of law, then in their exclusion from our collective mourning”.

“The human stories revealed in the Kapo trials demonstrate the complexity of the position of victims, a complexity that we must comprehend, if we wish truly to understand – and to the degree possible – overcome the Holocaust”.