Kamianets-Podilskyi and the 1941 massacres

Vu iz dos gelese? Where is the little street?

This was the title of the ambitious exhibition that recently came into being at the Sydney Jewish Museum. It was created by Wendy Sharpe, one of Australia’s most eminent artists. It took Wendy only a few days to transform three walls of the Museum’s gallery space into a mural of large-scale colourful drawings and paintings. They were inspired by her recent journey to Kamianets-Podilskyi in Ukraine, searching for the sites and the little street, where once members of her family had lived. Artwork can recreate history, in a way that is always infused with the artist’s perception of and emotional engagement with that history.

Sadly, the COVID-19 pandemic and lockdown resulted in the exhibition never opening its doors to the public. However, film and sound recordings together with webinars have safeguarded Wendy’s artistic masterpiece and the process of its creation.

The artist mentioned one significant historical event in passing: the mass murder perpetrated by the Germans and their collaborators exactly 80 years ago. The massacres at the end of August 1941 destroyed the thriving Jewish world of Kamianets-Podilskyi, and with it dos gesele, the little street.

This article sheds lights on the large-scale Judenaktion, carried out in broad daylight over three days. Between the 26 and 28 August 1941, 23,600 Jewish men, women and children were murdered. The slaughter was the first ‘open-air shooting’ of this scale of the Holocaust. It was a stepping stone on the road to the “Final Solution”, to the German genocide unleashed against the Jews.

Other larger mass executions followed. In the ravine of Babi Yar in Ukraine, more than 33,000 were killed at the end of September 1941. Around 25,000 Jews were shot in the Rumbula forest of Riga in early December 1941. History tells us that the German invasion of Soviet Union, code-named Operation Barbarossa, signalled the beginning of the conquest of the new Lebensraum (living space) in the East, the elimination of the “Jewish-Bolshevist” leadership and the annihilation of Soviet Jewry.

On 22 June 1941, Germany launched its war of destruction against the Soviet Union. Mobile killing units followed the advancing German army.

On 11 July, German and Hungarian troops arrived in Kamianets-Podilskyi, a beautiful city located on the Smotrych River in western Ukraine. Some 12,000 local Jews were registered, marked with the Star of David and forced into a ghetto set up on an island in the Old Town. The number of inmates rapidly increased. Hungary, as Germany’s ally, deported more than 14,000 Jews from newly annexed territories; among them were Jewish refugees from Czechoslovakia, Poland, Romania and Holland. Friedrich Jeckeln, the Higher SS and Police Leader in Russia’s south, was eager to declare his area as “Juden-frei” (free of Jews) as quickly as possible. High ranking officers of the German army shared this aim. A consensus was reached to exterminate the Jews, who were also labelled as ‘useless eaters’. The open-air shootings required a suitable killing field. On the outskirts of the city there was a deserted munitions depot marked with deep bomb craters. The killers and guards were aided by members of the local Ukrainian police and soldiers of the Hungarian army.

The slaughter commenced on 26 August.

After the war, one survivor testified:

“The site of the massacre was full of smoke coming from the constant shooting. Many were thrown into the grave and shot… some were injured and still alive. Several days afterwards, both day and night frightful noises were heard. Then the SS men forced peasants to cover the grave. The railway workers said that the earth was heaving for several days”.

One perpetrator, a member of Jeckeln’s staff, described in 1964:

“The site of the execution was cordoned by police units… The Jews came in procession. Some had to lie down. Others were shot in the back of the head while they were standing. There were men, women and children. I only shot men… In total I shot for one or two hours… If asked how many I shot there I cannot tell exactly, probably 50 or 100, I do not know”.

Another perpetrator, a member of Police Battalion 320, recalled in 1961:

“The Jews carried possessions which they wrapped in blankets. I spoke with some Jews… They were convinced that they would be resettled… I still remember that about six Jews were kept back for the end of the shooting. They were ordered by Jeckeln to stand between two bomb crates. Then Jeckeln made a short speech to us… He pointed specially to one Jew who was wearing a grey suit and who made a particular neat impression. In a dramatic manner Jeckeln referred to this Jew by name and declared: ‘Look at this man. He is the typical Jew who has be annihilated, so that we Germans can live’.”

A few Jews were temporarily spared death, only to be used as a source of slave labour. They were killed in 1942 and 1943.

On 27 March 1944, Kamianets-Podilskyi was liberated by the Red Army and the mass graves were excavated. Inspectors confirmed that more than one third of the victims had been buried alive.

Jeckeln continued his career as Higher SS and Police Leader in Russia’s north. After the war he was arrested by the Soviets, sentenced to death and hanged in Riga in front of 4,000 spectators. Early proceedings in Germany against members of Police Battalion 320 amounted to nothing. 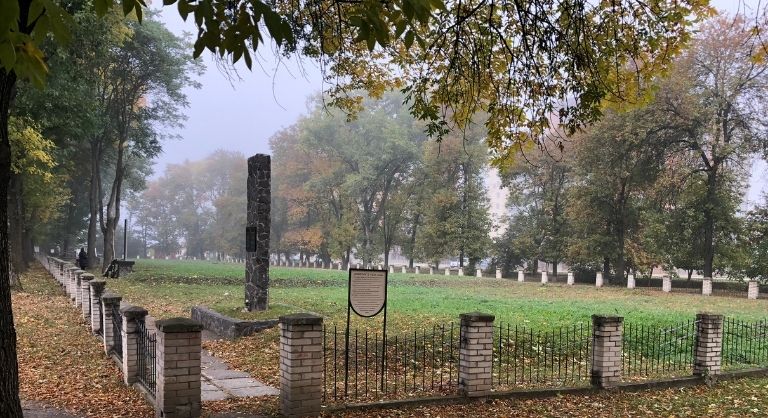