Anne Zahalka, acclaimed Australian artist, delves into vicarious traumas and her inherited memories of the Holocaust alongside Sylvia Griffin in our current contemporary art exhibition, The Fate of Things: Memory Objects and Art.

Recently Anne spoke to us about how she reconciles her mother’s memories with her life in Australia today, and how her art practice is a medium for conveying this process and her identity. 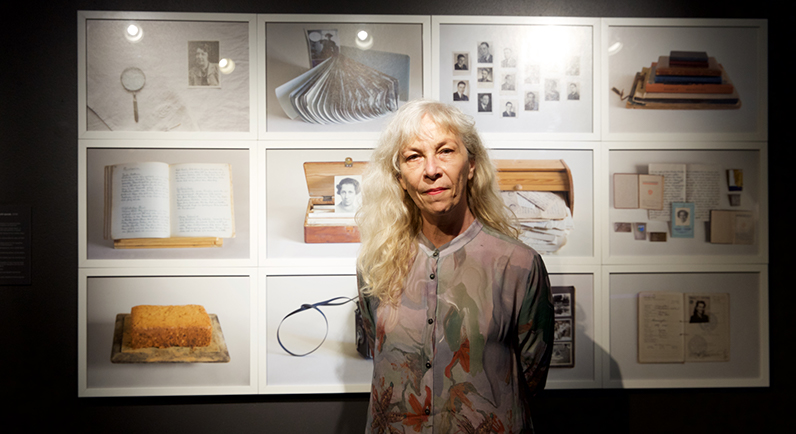 SJM: When was the first time that you remember learning of your mother’s experiences of the Holocaust?

Anne: I had known from an early age that my grandmother perished in the war but I hadn’t really understood what the Holocaust was until high school when I studied Modern History. My mother spoke of how she wished she had been able to do more to save her but was only a young woman having escaped to England with her sister. She couldn’t look at any imagery of the concentration camps as it caused her great distress. It wasn’t until my mid 20’s after the publication of my aunt’s memoir that I fully understood what had happened to my family during this time.

I travelled with my mother to Vienna in 2003 for the Jewish Welcome Service to learn of her experiences and she spoke of the home and wonderful life she had had and the great regret she felt in the loss of her mother.

My father’s experience was quite different to my mother’s in that he had escaped the Nazi occupation of his homeland in Czechoslovakia to join the allies to fight and liberate his country. He was Catholic and met my mother in England during the war where they married. My father returned a hero to his country but his family found it difficult to accept my mother, a Jewish, German speaking Austrian.

SJM: What kinds of emotions does working through traumatic histories through your art making process bring up?

Anne: I felt great sadness at times during the making of this work but also some solace in being able to tell my mother’s story through the ‘things’ she had kept so safely. It provided a process of mourning and a way of representing this history in a deeply personal way. Rediscovering her as a young woman through the letters sent by her mother and the love they shared was incredibly moving. I found myself reflecting on my own relationship with her and the incredible love she bestowed while recognising the similarities in expressing mother/daughter love. Learning through her letters of the anxiety and longing her mother endured was heartbreaking. I could only imagine her torment having a daughter myself and losing her.

SJM: Tell us a bit about the materials and media that you work with and how these materials connect to your history and memories.

Anne: I predominately work with photo media, using photography as a means of reflecting on the past, what is lost and what remains. At the beginning of developing this exhibition, I really wanted to work with my mother’s possessions and present them as sculptures and installations but I found it difficult to transform them into artworks. They were too present as objects and didn’t convey their embedded stories. After photographing these against a neutral background they became more emblematic of ideas, histories and the memories I wanted to express. I found I could connect with these objects through the process of photographing them, the camera providing a tool for analysing, interpreting and understanding them.

In working with the actual materials, such as the letters, my childhood hair and embroidered folk costume, within the museum space, I wanted to change the way they would traditionally be displayed to create a kind of disruption. For example, a carpet of letters is scattered across a Persian rug and arranged within its border, my hair irregularly hung into loose rings and knots references mourning jewellery and souvenirs, while the traditional folk dress with bonnet and bag is laid funereally to rest in a vitrine with its ghostly trace fixed into photographic paper hovering behind. Re-contextualising these heirlooms as artworks provided me with a way to tell my family’s memories against the backdrop of history, in order to connect with the past. Anne Zahalka, A thousand kisses across the sea, 2018. Photograph by Katherine Griffiths.

SJM: Are there any other influences and inspirations that inform your works in The Fate of Things: Memory Objects and Art?

Anne: My work has been influenced by some of the reading I’ve done around photography and memory from very early texts such as Camera Lucinda by Roland Barthes to current writing on photography. I found myself reading Primo Levi’s ‘If this is a man’ and ‘Truce’, and was haunted but also uplifted by his humanity expressed in his account of Auschwitz and the aftermath. I read everything I could find on the Lodz ghetto where my grandmother was deported and learnt of the Henryk Ross photographic collection that documented daily life there. This archival record has been digitised and is now online and forms part of the final chapter in The SBS documentary interactive ‘Nobody loves you more than me: Finding Margarete’.

Since my practice is photo-based, I’m drawn to artists who use photography to express ideas around memory, history, identity and place such as Sophie Calle, Christian Boltanski, Hiroshima Sugimoto, Adam Fuss, Vera Lutter, Sally Mann and Andrew Moore to name a few working in this field, but their influence is indirect.

I’d like to acknowledge Sylvia Griffin’s PHD thesis on post-memory and trauma in contemporary art practice and in particular her own work making personal memorials to grief and the memory of her family. It was through discussion with her and artists she shares a studio with that I found a way to realise the work for this exhibition.

The Fate of Things: Memory Objects and Art is in display at the Sydney Jewish Museum until 28 February. For more information about the exhibition, click here.