Recently released, the Gandel Holocaust Knowledge and Awareness in Australia Survey is the first and largest of its kind undertaken in Australia.

Researchers from Deakin University surveyed over 3,500 Australians from all states and territories in Australia, including a representative demographic spread to find what they know, and how they felt about the Holocaust.

Worryingly, the survey found that 25% of Australians know nothing about the Holocaust, demonstrating the importance of institutions like the Sydney Jewish Museum to reach out to broader audiences to address this gap.

Though worrying, the results of this survey are not surprising. Most people haven’t had access to specific Holocaust education. Though it has been mandated as part of the national curriculum since 2010, how long teachers actually have to teach this content varies widely. There is also space for better provision of teacher professional development to support teachers to teach this complex and sensitive history effectively.

There is space to make sure more Australians have access to our Holocaust museums. Only 10% of respondents had visited a Holocaust museum in Australia. But of that 10%, the majority, 83% strongly agreed that the experience was highly important for developing their knowledge and awareness of the Holocaust.

We know interactions with Holocaust museums are important spaces for Holocaust education, which makes ensuring access to visitation key. 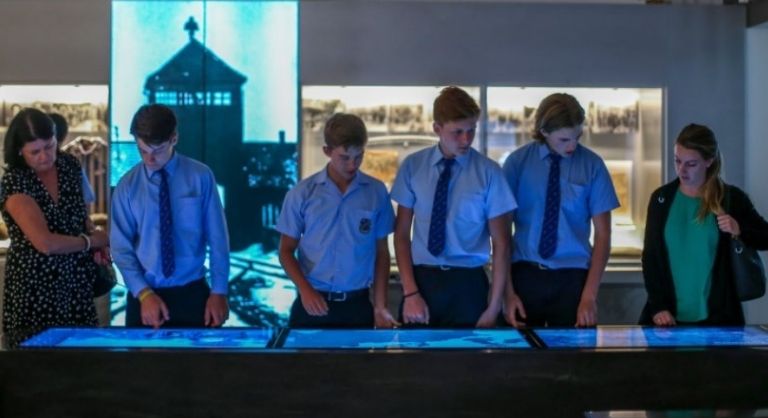 One of the most heartening findings of the survey was that higher levels of Holocaust awareness correlated with warmer feelings towards Jewish people and other minorities or vulnerable groups such as asylum seekers, and First Nations Australians. This suggests that there are direct benefits from Holocaust education – that it might create more harmony and social cohesion in Australia.

Our educators have anecdotal evidence to support this in their day-to-day experience. Each year, we provide thousands of students with the opportunity to meet and hear from Holocaust survivors. Many find this experience to be transformational, helping to put a human face to a terrible period of history. They come away from these programs better equipped to identify and deconstruct harmful stereotypes and to actively question discrimination.

The survey results have been incredibly reassuring as they give us good data, from a far broader range of the population to support the positive and far-reaching potential of Holocaust education.

Our team has the privilege of working with Holocaust survivors to give history a voice.

They come to the Museum to hear from a Holocaust survivor and to learn the stories behind the artefacts in our collection. We help make history real. We want people to know that the Holocaust happened to real people, who had real families, real jobs, and real hobbies, and what can happen when discrimination is allowed to escalate.

88% of respondents to the Gandel survey agreed that “we can all learn lessons for today from what happened in the Holocaust”. We now have the data to support this claim.

More info on the Gandel Holocaust Knowledge and Awareness survey can be found here: https://gandelfoundation.org.au/gandel-holocaust-survey/