An interview with the filmmaker, Joshua Marks

Last July, the award-winning Australian artist Wendy Sharpe took to the walls of the Museum, with a 40m mural inspired by her 2019 visit to Ukraine in search of the lost village of her ancestors. Titled “Vu iz dos Gesele?”, Yiddish for “Where is the little street?”, the mural, which was painted across our temporary exhibition space, was never meant to be permanent.

However, when Sydney was plunged into an extended Covid lockdown in the Winter of 2021, important scheduled construction works gave us no choice but to close the exhibition before any visitors would be able to see it. This meant Wendy’s artwork, much like the Jewish village in Ukraine that it depicts, would remain unseen.

At the time, we commissioned filmmakers Joshua and Karly Marks to document the creation of the mural and the exhibition. When they realised the mural wouldn’t be seen by the public, the pair turned our original project into a much larger documentary that became “Wendy Sharpe: Site Unseen” which will be aired on ABC’s Compass on 1 May.

We sat down with Joshua to discuss all things Wendy Sharpe, the artwork, the documentary and the underlying symbolism behind it all. You can read our conversation below. 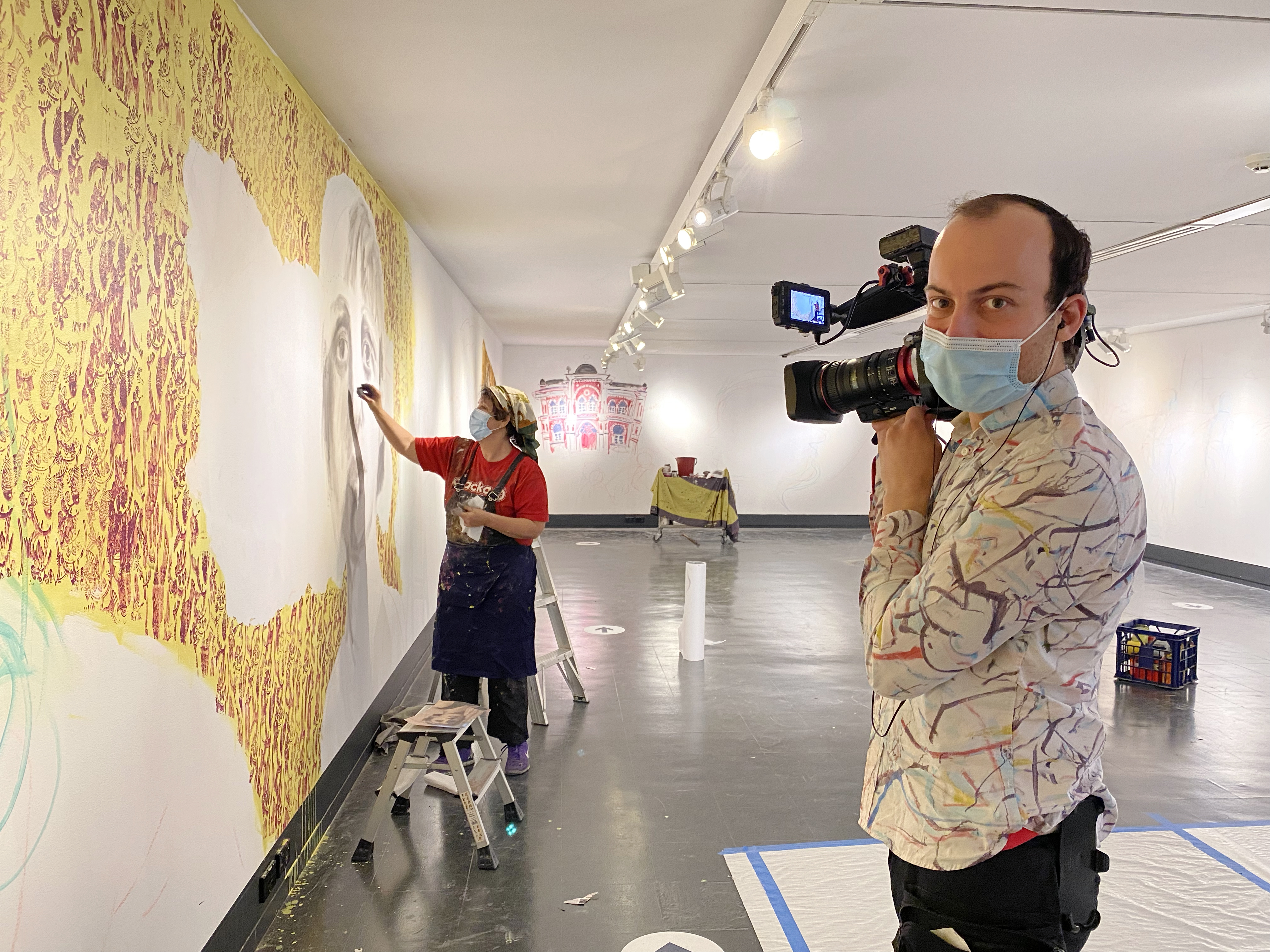 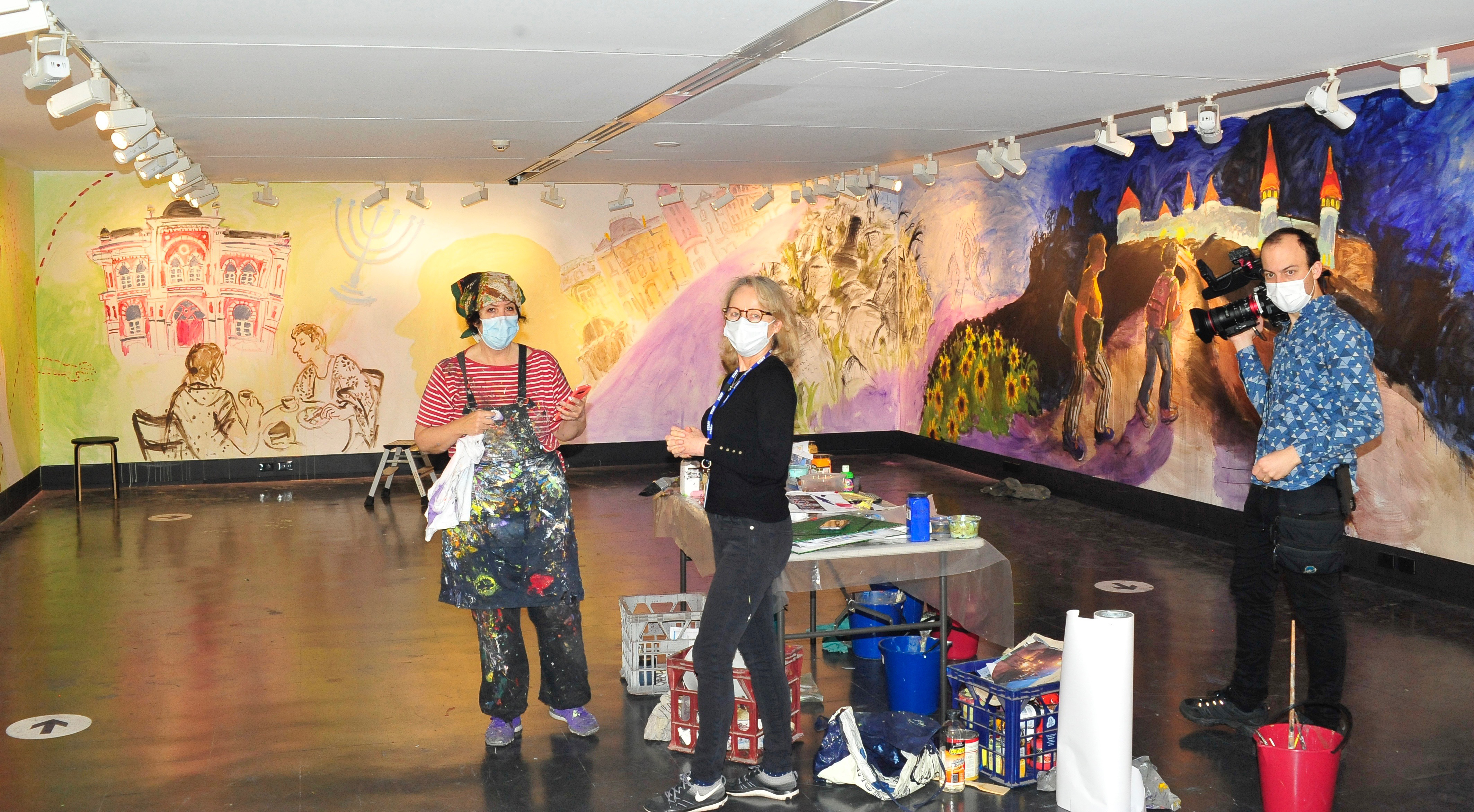 SJM: We initially commissioned you to create a five-minute documentary showing Wendy Sharpe painting her 40-metre mural. What made you feel compelled to turn this into a larger documentary?

Joshua: On Wendy’s first day she plotted out the whole mural and then started to paint. The film’s editor (and my wife), Karly Marks, suggested we call Judy Menczel to hear her thoughts on the potential of the story. Judy was excited and has been a great Producer of what is now an ABC Compass half-hour: Wendy Sharpe: Site Unseen.

What started as 2 half-day filming sessions ended with 23 days of filming, 72 hours of footage and 12 weeks of editing. The COVID undertones and the current war in Ukraine add currency to the story.

SJM: What was your highlight of filming the documentary?

Joshua: A clear highlight for me was filming Wendy as she drew her grandmother Bessie for the first time and then capturing her thoughts on what this would have meant to her father. Bessie would sing a song called “Vu iz dos Gesele? – Where is the Little Street?”, which is a Yiddish folk song about longing for a place that no longer exists. The great Yiddish singer Fay Sussman unexpectedly broke out to sing a portion, while standing next to Bessie’s giant portrait. This is the first time Wendy had heard it performed live. Sam Weiss composed our original score inspired the song.

SJM: Wendy Sharpe’s mural was ultimately never seen. How does this align with some of the motifs the artwork itself explores?

Joshua: Wendy had a clear vision from the beginning; her mural had to be destroyed. Just like Kamianets-Podilsky where Bessie’s family originated was the scene of destruction. First by local Pogroms and ultimately by Nazis in the first large scale killing of Jews in the Holocaust.

It was always meant to be painted over; it was just supposed to be seen first. No one could have known that Sydney’s lockdown would have continued for 15 weeks.

SJM: What is the power of art in conveying history? What do Sharpe’s paintings explore that you can’t get from a textbook?

Joshua: Wendy depicted her family experience in a personal way. About how she felt travelling back to her family’s past in London and Ukraine with her cousin Ruth Fishman in 2019.

“Other forms of remembrance, be it paintings, artwork, music, are equally and in some cases even more important and attractive to keep the memory alive or even to tell the story of the Holocaust and Wendy’s exhibition is a classic example.”

During my time attending Moriah College, we had two major opportunities to tell our family story. My Heritage in year 6 and of course the Hans Kimmel essay in year 10. Maybe we should expand on these and start telling our families stories with feelings as well as facts. Through performance, through art and through new ways of storytelling. Joshua thanks SJM’s Operations Manager, Aviva Wolff and our Head Curator, Roslyn Sugarman, for their help and support throughout the production.

You can support the outreach of the film here.