Maurice Rooklyn was one of Australia’s leading entertainers – a hypnotist, juggler, ventriloquist, illusionist and magician. Born in England in 1905 to Russian-Jewish parents, his family migrated to Australia in 1912.

Rooklyn was dazzled by a local magician as a child, and from the age of four knew that he wanted to be a magician. He would spend 14 hours a day practicing magic. His signature masterpiece was a billiard ball manipulation routine, called Symphony in Spheres.

The Amazing Mr Rooklyn’s shows incorporated a variety of musicians, dancers and comedians. At the height of his career he had his own travelling troop of about 30 people and just as many large trunks full of equipment for his shows. The Amazing Mr Rooklyn sawed people in half and made all sorts of things appear and disappear. The most dangerous trick he performed was catching a flying bullet in his teeth. On two occasions he was shot on stage in Bondi performing this act. Touring the UK, in 1936 Rooklyn became the first magician in the world to appear on television. In 1958, his 12-minute demonstration of finger wizardry earned him the title of World Champion Prestidigitator, the first Australian to win this award. 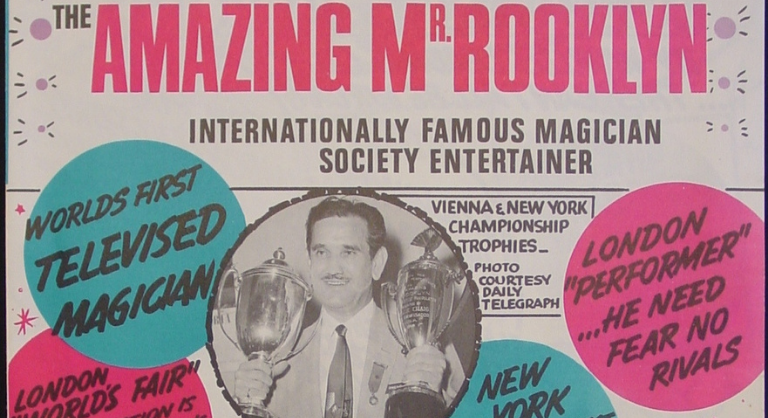 Image: SJM Curators visit the exhibition at the NSW State Library, in December 2021

Our Rooklyn collection is currently on display in the exhibition, ‘How’s Tricks? Magic in the Golden Age’, at the State Library New South Wales.

Mr Rooklyn has been given centre stage in a scene created for the exhibition that gives visitors a glimpse into the Amazing Mr Rooklyn’s stage opening that never failed to bring gasps from his audiences.

As the curtain went up on a darkened stage, a spotlight would reveal his immaculate figure standing at the top of ornate stairs, dressed in top hat, tails, cloak and gloves; as he descended, passing his hat and cloak to assistants, Rooklyn would deftly remove his gloves and toss them in the air, turning them into a white dove which flew around the stage.

To visit or learn more about the exhibition, click here.