There are many intriguing and unique traditions and sub-cultures that have evolved from these distinct regions. The myriad practices, rituals and experiences of these Jews make up an integral part of Jewish culture as a whole. Explore the different ways that the identities of Jews from Islamic lands have been shaped by their neighbours and how they define themselves within global and local Jewish communities.

This exhibition tells the stories of Jews from Islamic lands through objects from the Sydney Jewish Museum’s collection and those sourced from local families with direct lineage from these regions. See intricately designed ritual objects, such as an elaborately adorned Torah cover – or a tik – from India, a Passover seder plate from Egypt, and a colourful wedding dress from Iran. 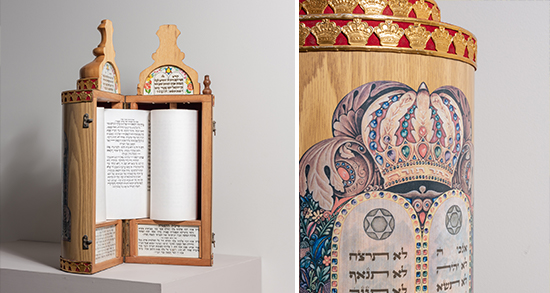 Jews from Islamic Lands is a special exhibition funded by the JCA Szlamek and Ester Lipman Memorial Endowment Fund.