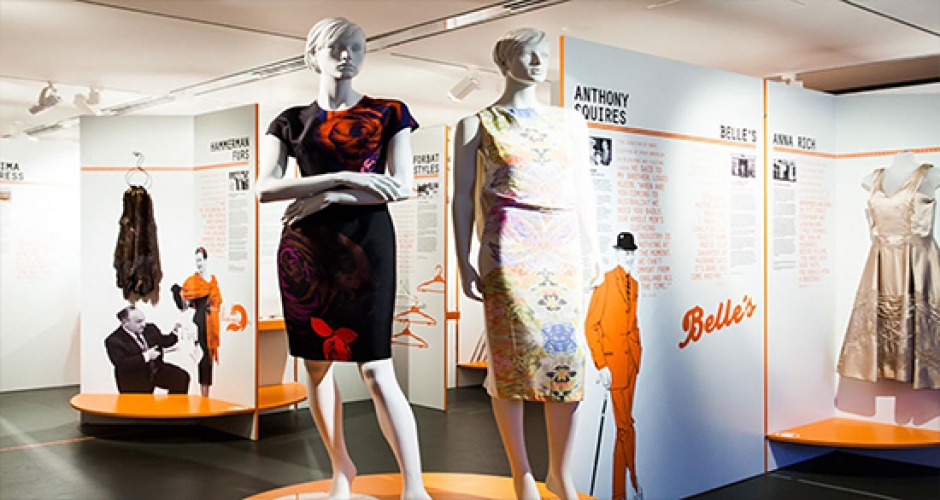 Where did the name TAROCASH come from? Who started up BLOCH ballet shoes and apparel? What famous people wore HAMMERMAN FURS?

These questions and more are answered in a new exhibition to celebrate the Museum’s 20th Anniversary Dressing Sydney: The Jewish Fashion Story gives Sydney a look into the Schmatte trade (an affectionate Yiddish term for rags or clothing). With over 100 contributors, the exhibition will be brought to life through recollections, rare photographs, garments and accessories.

This exhibition, curated in consultation with the University of Technology Sydney, is not only a celebration of the history of the rag trade starting in the early days of making garments and manufacturing, discovering drip dry fabrics, colours, knitting and sewing but also looks at the success and failures, the family businesses, immigrants and Holocaust survivors that came to Australia with nothing and started work in the trade, to discovering the next generation of Jewish designers – dressing both the everyday and famous Australian.

Learn how iconic Aussie brands such as Seafolly, Jets Swimwear, Best & Less, Lowes, Cornelius Furs, Anthony Squires and Dinosaur Designs started up. See Australian media tycoon Kerry Packer’s shoe ‘last’ (shape of human foot) on loan from the Perkal brothers, both Holocaust survivors, who immigrated to Australia in 1947. They are now in their 90s and still working five days a week. “We made shoes for people with big names: Frank Sinatra, Sammy Davis Jr., Bob Carr, and Kerry Packer. We made for the Queen when she arrived in 1954. We made her a pair of golden slippers. Big names, but just people, same as you and me.”

Reflect on the story of Anna Reich who owes her life to being on the now famous Schindler’s list. She was 19 years old when she was sent to Plaszow concentration camp, then Auschwitz Birkenau, and finally to Oscar Schindler’s factory in Brinnlitz. Most of her family had been murdered. She immigrated to Australia in 1950. Her sense of style and fashion was admired by locals. She opened a boutique in Eastwood and in 1962 built Eastwood Arcade which housed their two storey up-market women’s boutique called Anna Rich for Fashion and Quality. Regular clientele eagerly bought clothes imported from France. “I staged fashion parades for charity and my clients included influential people, such as the wife and daughter of Sir Garfield Barwick (former Attorney General.)”

Discover how Peter Weiss, King of the shirt maker dress, got his start in clothing and went onto design and manufacture uniforms for Ansett Airlines, Westpac Bank, Medibank Private and Wenona School. He also created Weiss/Pringle shops and says, “We ended up having about 24 concept stores called Weiss in David Jones. We became the biggest individual purchaser of Pringle knitwear outside Scotland.”

Read about innovative ideas. In the 1950s Margaret Gutman and June Dally Watkins created a concept called ‘Shopping While You Work’ taking clothes to the factories and holding fashion parades in their lunch breaks. It was still post- war Australia and no extended shopping hours, so they took the fashion to the workers.

Another innovator was Nathan Waigensberg, a Holocaust survivor from Poland, who started N Waige & Co, a recycled clothing company. They collected old clothes, cut them into rags and sold them as cleaning wipers to factories. It was truly ‘the rag trade’. After 60 years and three generations, N Waige & Co are still providing industrial cleaning rags as well as exporting quality used clothing and supplying retail outlets with vintage clothing.

Learn catch cry phrases that defined an era such as ‘It’s a honey, it’s a Hilton’, view a pair of famous Collins Gloves (a million pairs sold) and be inspired by the latest fashions from modern designers such as Josh Goot, Becky Cooper and Bridget Yorston who met at design school and formed Bec and Bridge, siblings Camilla Freeman-Topper and Marc Freeman of Camilla and Marc fame, to jewellery designer Elke Kramer and the lady behind the street and beachwear label Nookie, Nikita Sernack.
“This exciting new exhibition Dressing Sydney: The Jewish Fashion Story gives visitors a snapshot of the enormous contribution made to what is no longer a schmatte industry, but a fashion one,” says the Sydney Jewish Museum’s John Saunders Curatorial Chair Roslyn Sugarman.

“The story of Jews who came to Australia having lost everything except their lives, and started up in the fashion and garment industry is inspiring. Their entrepreneurship, ingenuity and work ethic was rewarded with respect and acceptance in the country that gave them countless opportunities and a safe place to establish a new life. This is a tribute to their contribution to the economy and to Australian fashion.”