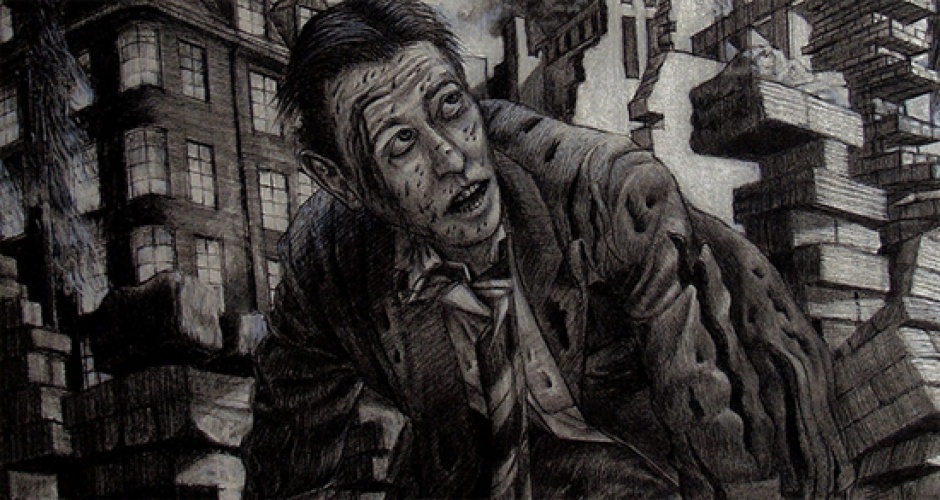 Harry J Fransman is lucky to be alive.

All but one of his family members perished in the Shoah along with six million Jews. Harry himself had countless brushes with death but because of some miracles he survived. On May 10th 1940 Harry’s life turned into a nightmare.

That day the Germans invaded the Netherlands, and for Harry it was the beginning of a five year fight for survival. From the German bombing of Rotterdam and increasingly brutal antisemitic measures of the occupation, to the inhumane treatment as a forced labourer and the harsh conditions in Blechhammer (a sub-camp of Auschwitz). It was on one of the infamous death marches that Harry managed to escape.

Over the past decades, Holocaust Survivors have created personal works of art as they struggle to comprehend the tragedy. Harry commissioned three artists to illustrate his story, focusing on seminal events that he experienced throughout this harrowing period.
He does not hold back.

Through his direction and the skilfulness of the artists, viewers are confronted by the harsh reality of the Holocaust in graphic detail. These dramatic vignettes together depict the brutality forced upon individuals and why many Survivors attribute their survival to a ‘miracle’.

The Sydney Jewish Museum was founded by Survivors, Harry amongst them. Survivor guides have been at the forefront of the Museum since its inception. Visitor feedback constantly highlights hearing from Survivors as one of the best features of a visit to the Museum.

Obliged to Remember – Zachor – and keep the memory of the Holocaust alive, their stories have given a personal aspect to this dark chapter in history.