This month we introduce Holocaust child survivor Yvonne Halas. Yvonne’s life began in war time, as she was born in Budapest, Hungary in 1942.

Shortly after Yvonne was born, her father was sent away to a labour camp where the inmates were forced to work hard and were fed poorly. Yvonne’s father returned home in 1944; however, the family’s joy was short-lived, as Yvonne and her family were ordered to be at the railway station early the next morning with one small suitcase per person.

The train they were forced to board was a cattle train. As it travelled through the countryside it picked up all the Jewish families from each town. As the carriage filled up, the distressed occupants were shoving and pushing each other, attempting to guard their own areas and to shield their loved ones.

Yvonne’s parents hatched an amazing plot. At the next station, just as another family were trying to position themselves within the carriage, and just before the train doors slid shut, Yvonne’s mother took her in her arms and threw her as far as she could out of the train. She was unaware if she was saving Yvonne or endangering her. At the next stop, she leapt out of the train and walked back to find Yvonne. When she found her daughter, someone had already stolen her clothes and her little earrings had been torn out of her ears. Yvonne and her mother walked along the railway line hoping to find Yvonne’s father, who was also planning to jump out, but they never found him.

Yvonne and her mother left Hungary in 1948 after it became clear that Yvonne’s father would not return. It was only in 2008 that they found out he had spent five months in Bergen-Belsen concentration camp and had died there.

In this photo, Yvonne holds the passport belonging to her mother, which lists the name of her father who perished in Bergen-Belsen. 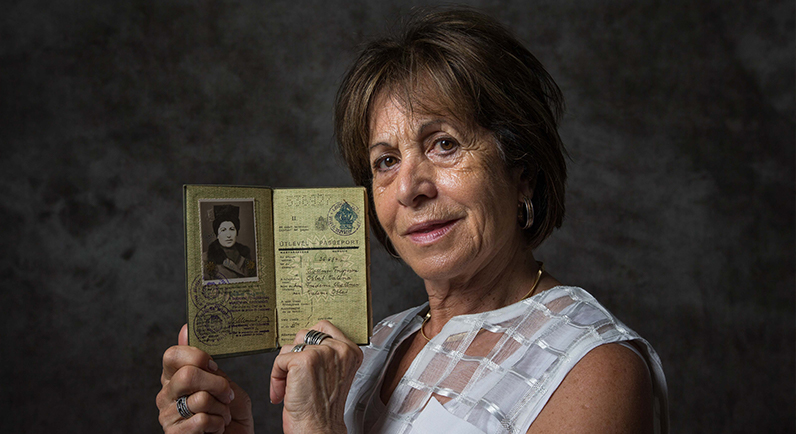