This month we introduce Vera Faludi. Vera was born in 1929 in Sofia, Bulgaria.

In Sofia, Vera attended an Italian pre-school, a Hungarian school, and then a German school with her brother Teddy. By the end of 1939, Jewish children were no longer allowed at German schools, and Vera moved to a French school run by nuns. Languages were important to her father. He thought they could open doors. This, Vera says, was a partial reason for her family’s survival.

In 1942, a friend of Vera’s father at the Hungarian Embassy offered to move, via diplomatic courier, the family’s most valuable belongings from Sofia to Budapest – Persian carpets, paintings, porcelain. However, their belongings never arrived. They were most likely stolen by the diplomat.

Teddy and Vera’s father were sent to forced labour, and Vera and her mother had to move into the ghetto. One day, Arrow Cross soldiers came and took all of the women aged 16 to 60 from the ghetto. Vera, her mother and her grandmother all hid in the attic. The attic space was so small that they had to stay lying down or in a half-seated position. They stayed here for a week, after which they managed to procure papers to move into a protected house of the Swedish consulate in Hungary.

One day, after the war, a dirty, skinny man approached Vera and she began to run away. She heard a voice, ‘Don’t you recognise me?’ It was her brother.

Shortly after liberation, Vera met with an old friend, George Faludi. She was 16 years old. They were married in early 1946, and left Hungary in 1947 for Brussels, where they stayed for eight months waiting for visas. George and Vera went to Paris, and by 1948, with false visas, left for Uruguay. They immigrated with their family in 1971 to Australia. 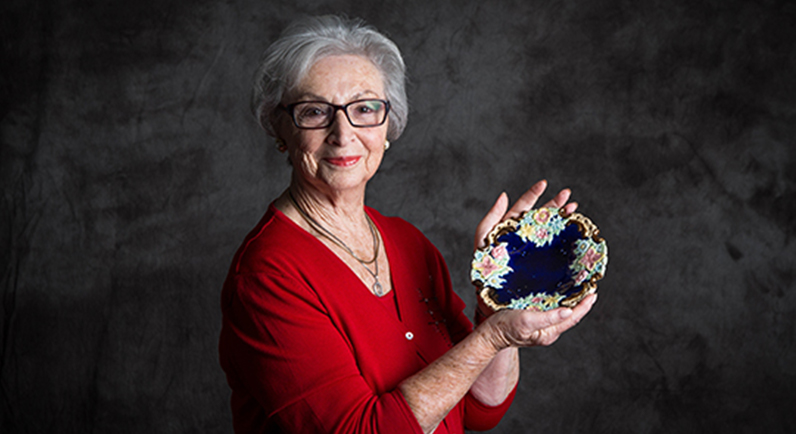 Vera and George took few belongings when they escaped from communist Hungary. This dessert plate pictured us one of six which Vera took to remind her husband of his mother’s baking and the desserts they enjoyed.