This month we introduce Tom Fleming. Tom was born in 1938 in Bratislava, Czechoslovakia.

With a twinkle in his eye and a mischievous grin on his face, you can still see the six-year-old boy that Tom once was. Tommi was independent, confident, and a little naughty. These characteristics became more pronounced once he was imprisoned in Theresienstadt. He took up a dare to pin a ‘tail’ on an SS officer, played tricks on other child inmates and often suffered profound consequences after such misdemeanours.

Tom remembers the oppressive rules, the changing cast of prisoners, the brutality of the camp guards, and most vividly, the time when he was forced into a burial pit and ordered to spread lime over corpses. Despite the daily terror, he knows the exact day of his most distressing moment in Theresienstadt: 16 February 1945. This day is seared into his memory because when he awoke on that day, his mother Lolli, who had been a source of comfort and protection, had vanished. He knew what disappearance meant, but he was too young to know that his mother was pregnant and had been taken to the hospital to deliver another son, Peter. Of the 350 children born in Theresienstadt, his brother would be one of 25 to survive. 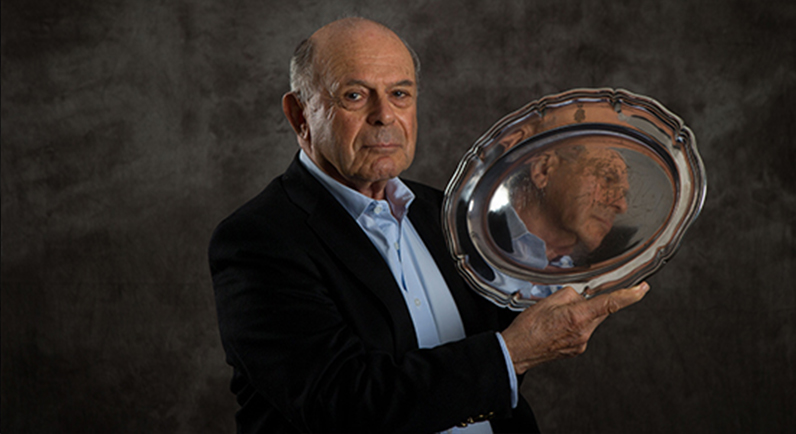 Towards the end of May 1945, a few weeks after liberation, Tom returned to Bratislava with his mother and brother to wait for the return of his father. It would take months before news would reach them confirming that his father, along with many other family members, was murdered in Auschwitz.

Etched into Tom’s personalty is a spirit of adventure and playfulness, despite the pain and sadness he bears from the past. He learned at a tender age about the precariousness of life, and he intends to make the most of it.

In this photograph, Tom holds a silver serving platter containing the family crest, salvaged from the family castle in Slovakia.