This month we introduce child Holocaust survivor, Susan Warhaftig. Susan was born in 1937 in Vienna, Austria.

During the Spanish Inquisition, Susan’s mother’s family escaped to Hungary, and in 1910 they relocated to Vienna. Susan’s father was born in Poland.

In 1938, with some foresight into the situation that could unfold for Jews in Austria, Susan’s family tried to escape to Switzerland. However, they were turned back by a Swiss policeman when they reached the border.

In 1939, Susan’s father was taken to Buchenwald, where he was murdered. Unfortunately, Susan doesn’t remember her father as she was so young when he was taken.

Susan remembers how the laws imposed on Jews restricted her family. They were ordered to wear the yellow Star of David, they were not able to go anywhere they wanted, and two extra families were forcefully moved into Susan’s family’s apartment.

The scene Susan remembers most from her childhood was her mother, in the street, clearing snow and ice away, with a Nazi standing over her making sure she did a good job.

Susan’s brother attended a Jewish school where they hoped to send these children to Palestine. During this time, Susan’s family twice avoided going to a concentration camp. In March 1942 two men, paid by Susan’s uncle in Budapest, arrived to smuggle Susan, her mother and brother into Hungary where it was safer. However, the men were only prepared to take two of them. Susan’s mother made the decision to take Susan and leave her son. Susan presumes this is because she felt he would get to Palestine. Whilst her mother rarely spoke about it, Susan was preoccupied with it. In 1944 Susan and her mother went into hiding with false papers in a remote village in Hungary.

Towards the end of the war, Russian soldiers arrived. Whilst the soldiers were their allies, they caused havoc. They got drunk and molested Susan’s mother. At the end of the war antisemitism was still rife. Susan was still called a ‘dirty Jew’ and was spat at. It took her a long time to come to terms with being Jewish.

Susan’s uncle in Australia found out her and her mother were alive and helped them leave. They arrived in Sydney in December 1947. Growing up was difficult for Susan, after many changes of schools and problems at home. Her mother died when Susan was 20 years old.

Information found in a diary found by Susan’s aunt led her to her father’s family and seven cousins, who were scattered around the world, in 1997. In 2002, Susan learned that her brother, taken from school, was shot and killed in Russia at the age of 11. 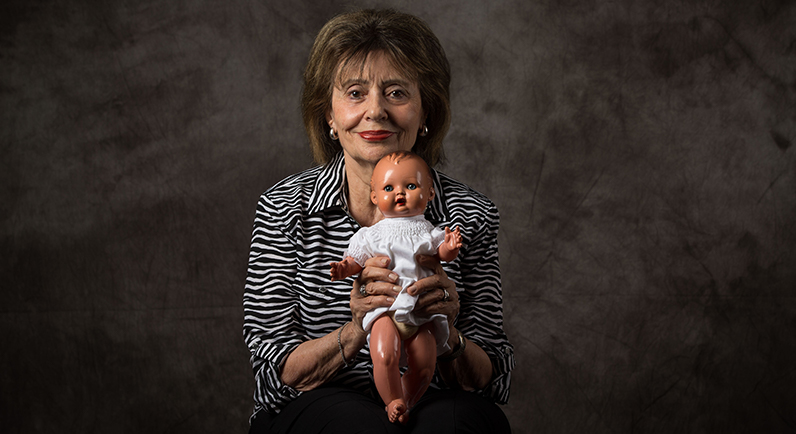 In this photograph, the doll that Susan holds is the first toy she received after the war ended. It was a gift from the non-Jewish child of a neighbour. Susan still treasures this doll, and uses it to help her tell her story to student groups in the Museum.