This month we introduce Holocaust survivor Peter Rossler. Peter was born in Prague, Czechoslovakia, in 1930.

Peter was nine years old when Germany invaded Czechoslovakia. Life as Peter knew it began to change. Anti-Jewish laws were enforced, and Peter and his brother Honza were banned from attending public school. Peter’s world began to shrink with the removal of everything he knew and loved.

Together with his parents and brother, Peter was deported in 1941 to the Lodz ghetto in southern Poland. Peter believes that his parents knew little of the full horrors that lay ahead. The Nazis kept things vague, referring euphemistically to the deportation process of ‘resettlement’. They were met with appalling conditions and a lack of nutrition; Peter’s father, aunt and uncle all died within six months of arriving in the ghetto. His dear mother, Lilly, died a few months later. 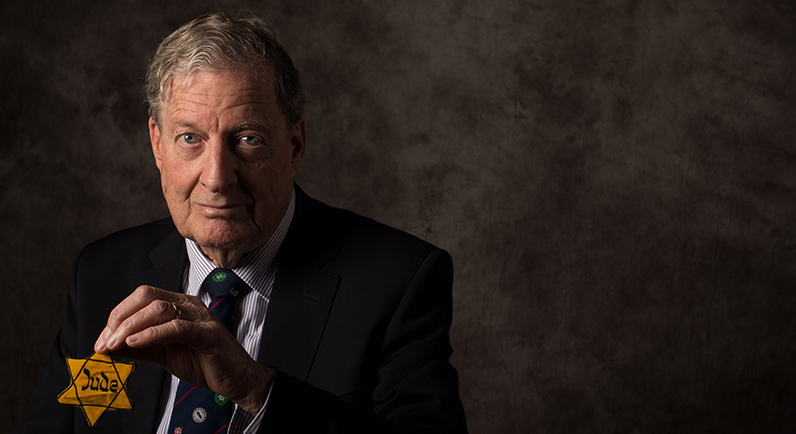 Peter and Honza were sent to an orphanage in the ghetto. On Peter’s thirteenth birthday, they traded a pair of winter boots for a bowl of soup. Peter remembers, “It was the best meal we had had in a long time, and a truly memorable birthday treat.”

The brothers fended for themselves by working in numerous ghetto factories that produced goods for the Nazi regime, until the ghetto was closed in August 1944. When Lodz ghetto was liquidated, Peter, aged 14, and his brother were sent to Auschwitz. “We were no longer humans: not names, but numbers. I didn’t think too much about the future…just to survive another day.”

Peter and Honza spent nearly four years in ghettos and concentration camps, including Auschwitz-Birkenau. In 1945 they survived a 50 kilometre death march from Auschwitz to Camp Allach, close to Dachau.

On 30 April 1945, the two brothers were liberated by the American Army. They returned to Czechoslovakia, but because of the communist takeover, the future there looked bleak. Peter decided to migrate to Australia. He arrived on the Derna, which transported 58 Jewish refugees and 700 displaced persons from Europe. He arrived in November 1948.

Peter loves his life in Australia where he is a retired research chemist. He has shared his life story many times at the Sydney Jewish Museum. Of his identity, he says “I am not a victim, I am a survivor”.

Peter’s story is featured in the book Words to Remember it. To purchase a copy of the book, click here.