This month we introduce the late Holocaust survivor Oscar (David) Benedikt. David was born in 1920 in Brno, Czechoslovakia. He described himself as a “spoiled only child” to convey the tragedy of what lay ahead.

In 1939, Czechoslovakia was occupied by the Nazis. Jewish students were thrown out of schools and universities; trainloads of Jews were later deported to Theresienstadt.

In 1942, 1,000 Jews were sent by train to Riga, Latvia, without food or water for five days; 80 young males were selected, and the rest of the Jews killed by engine fumes from exhaust pipes fed into the vans. This was how David’s parents, both aged 49, perished.

In Riga ghetto, where David was deported, food rations were miserable but community life was organised. Young people could be educated. David took courses in Jewish and Zionist history. David was sent to the harbour, offloading 12 hours a day, carrying 80kg bags of grain on his shoulders.

In 1944, with the Russian advance coming closer, the ghetto was liquidated. David and the other inmates were taken to Kaiserwald and then Stutthoff concentration camp. They could hear the Russian artillery. 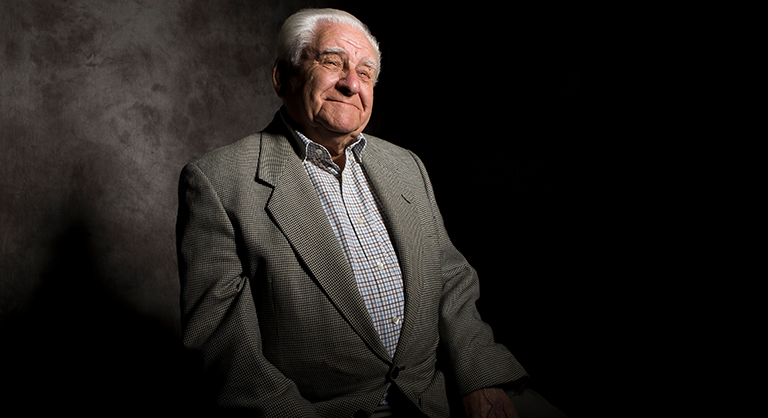 In February 1945, David went with the non-Jewish Poles on a death march, with only a loaf of bread to eat. Stragglers were shot in the ditches. David lost consciousness, and two days later he woke to see their liberation.

People roamed the countryside collecting survivors and treating them for whatever ailed them. One third of those liberated didn’t make it.

In 1946, David and his wife arrived in Australia thanks to Mr Arthur Calwell,the Immigration Minister who let many survivors into the country. David never went back to Europe, describing it as “the graveyard of my people.”

David felt an obligation to speak about his experiences, “because when we are all gone, the deniers will still be around.”

To learn more about David’s life, you can purchase his memoir here.