Olga was born in Bratislava, Czechoslovakia in 1926. She was 14 when the war broke out in 1939 and life changed dramatically for her and her family. New laws restricted their fundamental freedoms such as being banned from school, sitting on park benches, and curfews were enforced after dark. As Jewish people, they were also forced to wear a yellow Star of David on the outside of their clothing, which made them vulnerable for persecution.

In 1942, Olga’s sister was rounded up with other 16 year old Jewish young adults and transported to Auschwitz. Olga never saw her again. Fearing for Olga’s safety, her family illegally crossed the border into Hungary, but upon finding the situation there just as precarious, they returned to Bratislava. However, soon after going into hiding, they were betrayed by their ‘friend’ and sent to a ‘collection camp’ before herded into cattle carriages heading for Auschwitz. Olga’s father and grandmother were selected and taken directly to the gas chambers. This was the very last time Olga saw them.

Olga, who was now 17, and her mother were ‘selected’ by Dr Joseph Mengele and were stripped, shaven and numbered. Olga describes this process as “horribly demoralising and humiliating”. However, Olga and her mother had each other, which she considers lucky as very few daughters had the only support of their mothers in the camps. Conditions in the camps were severe. Hunger and disease were rife: “We cooked verbally…and promised ourselves to make the most beautiful cakes if we survived.” In the worst conditions, imaginary cooking kept their spirits up and filled the hunger in their stomachs.

After having been in satellite camps for a long time, they were finally marched out. Olga and her mother began their death march during the bitter winter of 1944-45. They marched for hundreds of kilometres through day and night to Dresden, where they were then transported to Bergen-Belsen concentration camp. Suffering from typhus and diphtheria and starving, they miraculously survived to see the camp’s liberation by British and Canadian troops on 15 April 1945. Waiting in a queue to register as survivors for an ID card the day after liberation, Olga’s mother’s body finally succumbed and she collapsed and perished. The celebration of freedom quickly turned to devastation, and Olga was now alone.

Three weeks before the end of the war, Olga was taken to a German hospital and left unattended, as the German nurses still believed that Hitler would win the war. She weighed just 29 kilograms but her mind was sharp. A British Army Catholic priest came to administer last rites, but Olga told him in English, “Thank you for your visit, but I am Jewish, and I am not going to die”. Olga asked the priest to return with an army rabbi and return Olga to the improvised sick bay. Olga was soon repatriated to Pilsen, where she recovered with the help of a kind stranger. It is important to Olga to remember the good people and wonderful strangers that helped her recover. “If I don’t mention the good people, we lose faith in humankind”. 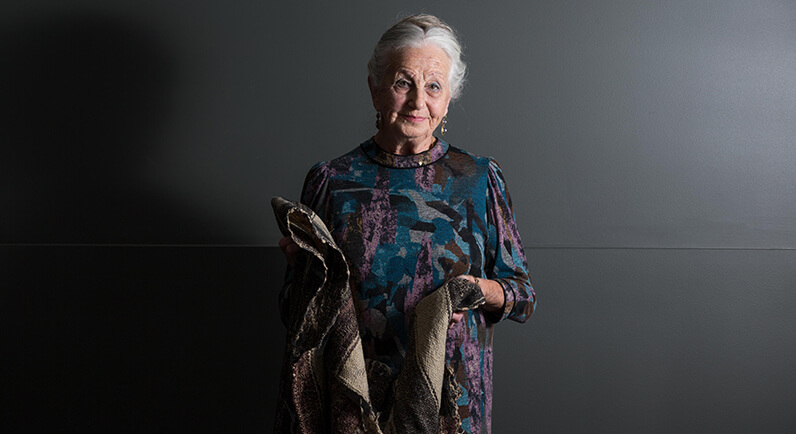 In 1947, Olga met and married John Horak in Bratislava. They left Bratislava due to political changes and spent a few months in transit in Zurich, Switzerland, before they applied for legal landing permits for Australia. Olga and John arrived in Sydney in September 1949 and started a new life. Together they established a successful manufacturing business and had two children.

Olga has been volunteering at the Sydney Jewish Museum since its inception, where she continues to inspire all who have the opportunity to hear her share her story.

In this picture, Olga is holding a blanket woven by inmates of Auschwitz from human hair and recycled fibres, made for the SS guards. Upon liberation at Bergen-Belsen, the guard who owned the blanket threw it away and Olga picked it up.

To read Olga’s memoir, Auschwitz to Australia, you can purchase a copy of her book here.