This month we introduce Holocaust survivor Mimi Wise. Mimi was born in Milan, Italy, in 1937. As a baby, Mimi moved with her family to France; first to Strasbourg, then Perigueux, Evaux les Bains, and then Felletin.

On 4 November 1943, in Felletin, the Chief of Police sent his wife to warm Mimi’s parents, Lola and Chaim Goldman, that they had to leave immediately. The Vichy police would soon be coming and their family name was on the Gestapo arrest list. Mimi, her younger brother and her parents left immediately, without any personal belongings.Mimi’s parents escaped in separate directions, each with one of their children, both to ensure their own survival and to warn other Jewish people. Mimi recalls that her earliest memories are of continual displacement.

After several days, Mimi’s family was able to return to Felletin, and her parents obtained false identity papers for the family. Mimi and her brother, Sam, were then hidden on a pig farm in Le Mas-d’Artige. They felt like they were in the middle of nowhere, but Mimi was grateful to have her brother, Sam, with her. Sam was the most important person in Mimi’s life. They relied on one another.

When the police began searching for Jews in hiding, they came to the farm. The farmer was afraid for his family’s safety, and sent word that Mimi and her brother should be picked up. Mimi and Sam were reunited with their parents in Arboureix, a tiny village where they found shelter. Mimi’s parents told the mayor that they were Jews looking for safety. He replied, ‘We don’t like the Jews but we hate Germans more,’ and agreed to assist.

Mimi remembers sensing danger and being acutely aware of their surroundings. One morning, Sam and Mimi were playing on a village dirt road when they heard and felt rumbling. They quickly ran home as a convoy of German soldiers came through the village.

Memories of Mimi’s stay in Arboureix culminate in a vision of hundreds of planes flying overhead while she was hiding in the fields. Mimi sensed her parents’ apprehension, unsure if “good or bad”. Liberation was only a matter of time.

At the end of the war, aged eight years old, Mimi was told that her real name was Miryam; a biblical name that could have endangered Mimi’s life by identifying her as a Jew. 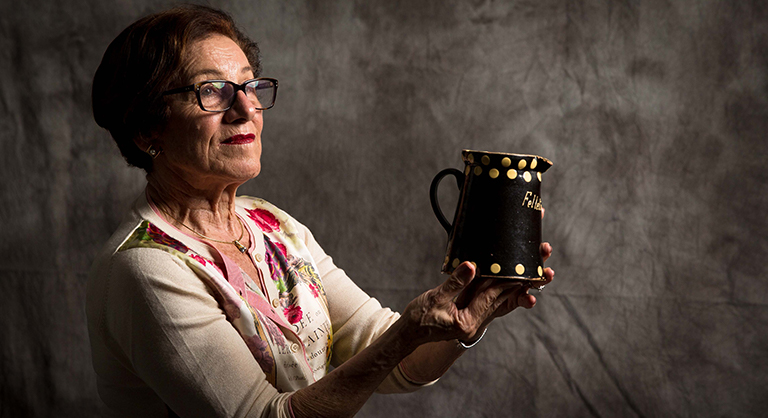 In this photograph, Mimi holds a jug that belonged to her mother. It was one of the few household items retained from their home in Felletin, France.