This month we introduce to you Holocaust survivor Maurice Linker. Maurice was born in 1930 in Czernowitz, Romania.

Maurice recalls when he was 10 years old, in 1940, he lived in a town with 120,000 people, of which 55,000 were Jewish. Jewish life thrived in Czernowitz. Jewish people were a part of the life of the town, including attending the city’s own university. Maurice enjoyed school; he was good at math. He had a large extended family with many cousins. Life was great.

Then Romania allied with Germany. They enacted the Nuremburg Laws and Maurice’s father’s shop was taken away. Rules were strictly enforced; people were stopped in the street. You could only go out for a few hours a day and it was arranged in such a way that it became difficult to buy food from farmers in the market.

Maurice was forced to wear a yellow star. He was beaten up and bullied by non-Jewish boys who used to play with him. Maurice was unable to defend himself for fear of being imprisoned or shot by the Nazis.

Maurice and his family were placed in the Czernowitz ghetto in 1941. He couldn’t go to school for three and a half years. Maurice explains that he lost part of his youth. People were being sent from the ghetto to labour camps or packed into nailed-shut cattle cars and set to other ghettos.

The Mayor argued with the Nazi leadership and said, ‘These people built the city; you can’t treat them like this. I need them.’ He was told to prepare a list of stay permits. The Mayor used any excuse he could to issue them. Maurice’s family were allowed to stay.

After the war, the political situation changed and Maurice’s father decided they should escape illegally across the border.

Maurice has now been in Australia since 1951, where he had a challenging and interesting career as an electrical engineer.

He tells of his wartime experiences and survival to make sure that these stories are passed on. He says, “I cry every time I tell my story. My family, my relatives and friends suffered famine, were subjected to indignities, persecutions and nearly shot by both the Nazi and communist governments”.

In this photo, Maurice holds a photograph of himself. He can’t remember why this photo was taken. He believes he was 17 and living in a Displaced Person’s camp in Linz, Austria. Maurice feels this image shows a sad and serious boy, with little money, no profession and few prospects. 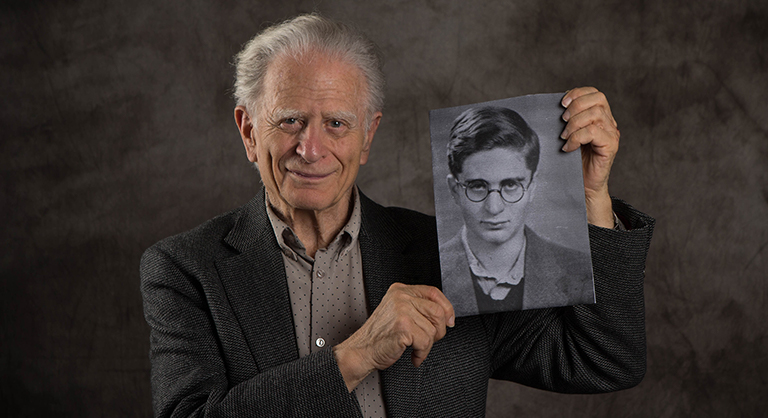