This month we introduce Holocaust child survivor Litzi Lemberg. Litzi, born in 1939 in Vienna, Austria, was a baby when World War II began.

It was only as an adult, that Litzi began to fully process her complicated past.  As a lonely 15 year old, she began to rebel against her strict father. Her mother was the peacemaker between them.  At 17, emotions got the better of her and Litzi confronted her father, announcing, “I wish you weren’t my father.” “I’m not”, he blurted out.

Litzi’s biological parents and brother had been murdered in the Holocaust, and the man who Litzi grew up understanding as her father had found her, the sole survivor of her immediate family, on the Red Cross list from Theresienstadt. Litzi came to learn that her father was in fact her uncle.

Stunned and shocked by this revelation, an understanding of long-hidden memories began to make sense: of other children, shaved heads, precarious toilets, wooden bunks, cobblestones and bare feet, travelling in trucks and then by plane to England. Litzi found all of these recollections too hard to process and she didn’t speak about it until years later.

In 1985, Litzi attended a talk by Sarah Moskovitz on the Holocaust and the effects of experiences on child survivors. Sarah had conducted interviews with children under 12 from Theresienstadt who had been sent to a Jewish orphanage, Lingfield House in Surrey, England, after the war. Litzi knew in her mind that she had been there but had tried to push the knowledge away. As Sarah spoke, Litzi began to realise that she was one of the people Sarah was talking about.

Confronted by her silent and hidden past, Litzi felt exposed, alone in a room full of people. Litzi was interviewed by Sarah the next day, and for the first time Litzi was able to vocalise every distinct memory and some of those that had faded with time. This was the beginning of Litzi identifying herself as a ‘child survivor’. 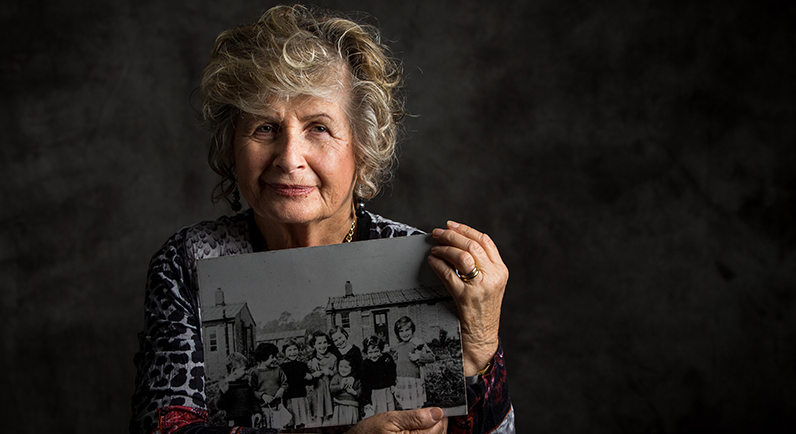 In this image, Litzi holds a photograph of herself and some other children in Theresienstadt. This photograph anchors Litzi to the past and her long-suppressed identity as a child Holocaust survivor.

Litzi’s story is featured in the book Words to Remember it. To purchase a copy of the book, click here.