This month we introduce Holocaust survivor Lina Lipton. Lina was born in 1923 in Lvov, Poland (which is now Ukraine).

Lina remembers her vibrant family life filled with love and fond memories before the war. She spent school holidays in the mountains. She recalls how she was quite protected from experiencing any antisemitism.

The start of World War II in 1939 came as a shock. Lina’s father lost his job and in 1941 German soldiers forced Lina and her family out of their apartment and into the ghetto.

The treatment of Jews by the Nazi soldiers and Ukrainian police inside the Lvov Ghetto was frightening. Lina says ‘’we were less than an animal or an insect. We were something to be gotten rid of. We lived with fear; we woke up with fear, and went to bed with it”.

Lina decided to escape from the ghetto, hoping that she may have a better chance to survive. She remembers, as she was about to leave, her mother stood on the staircase of the cellar just looking at her. Nobody wanted to say goodbye. Lina’s family was devastated. That was the last time Lina saw her family.

Lina recalls, “To this day I struggle with the guilt of leaving my family in the ghetto. That is how it will be until the end of my days.’’

From Christmas of 1942 until liberation Lina found refuge with an elderly couple. She lived under the false name of Halina Jazlowiecka.

Soon after the war, Lina met her husband, William Lipschutz and they were married within three months. They both desperately wanted out. Luckily, they managed to secure a landing permit for Australia and arrived in 1950 with their son, Norbert, who was born in 1948.

With no relatives, friends or command of the English language, things were very hard for many years. But they made a great effort. Lina believes her parents and grandparents would have been proud of her. She feels her life is fulfilled with her son and three grandsons.

Lina says, ”I am always trying to deal with my pain. It never goes away. I put it aside and promise myself that I will deal with these memories later. I will try tomorrow, I tell myself. You handle life as it comes, day by day.” 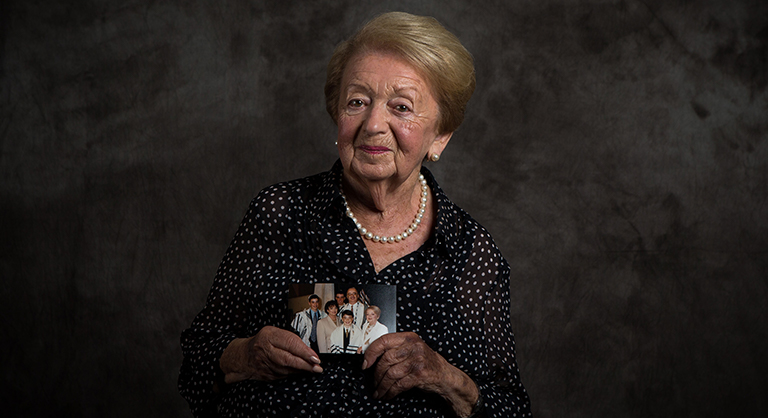 In the photograph that Lina holds in this image, she is surrounded by her family at her grandson’s bar mitzvah. Having survived the Holocaust and struggled to re-build her life, everything seemed unreal, but having a baby helped. “We were strong enough to start again.”