This month we introduce Joe Symon. Joe was born 1925 in Budapest, Hungary. Before the war, he was a boy scout leader.

Fighting fit and headstrong in every way, Joe rebelled against the restrictions placed on Jews. As a 19 year old he was called up for forced labour and initially resisted the order. He was later forced to go in June 1944, under threat of punishment.

A few months later in October, Joe managed to escape and joined the underground Hungarian resistance. Listening to forbidden radio stations such as Voice of America and Free Europe, he heard details about the concentration camps and gas chambers, and became determined to fight the Germans and sabotage their actions at all costs. If he was going to face death, he would die with dignity. His purpose in the underground was to save lives: help people, slow down the German war machine as much as possible, and if it came to it, fight. Joe sabotaged German roundups, smuggled Jews out of the ghetto, and even organised food for starving children in hiding, despite food shortages and restrictions.

Details of this time are scarce. Joe’s missions were shrouded in secrecy under the oath that he took to protect the organisation, his commander, and missions he was involved in.

When he recalls these daring actions, he never fails to mention that he didn’t always like everything that he was involved in, but he knew that he had to do it. The only way for him to defend the future of his people was to fight for it.

Joe used his scouting knowledge to orient himself to find the nearest township when escaping and hiding in the forest. This ingenuity and bravery helped him survive the war.

Joe moved to Israel after the war before immigrating to Australia in 1959.

In this image, Joe holds a photograph of himself, aged 15, leading a shabbat service in a Jewish scout camp in Hungary in 1940. The skills he learned as a boy scout helped him to survive. 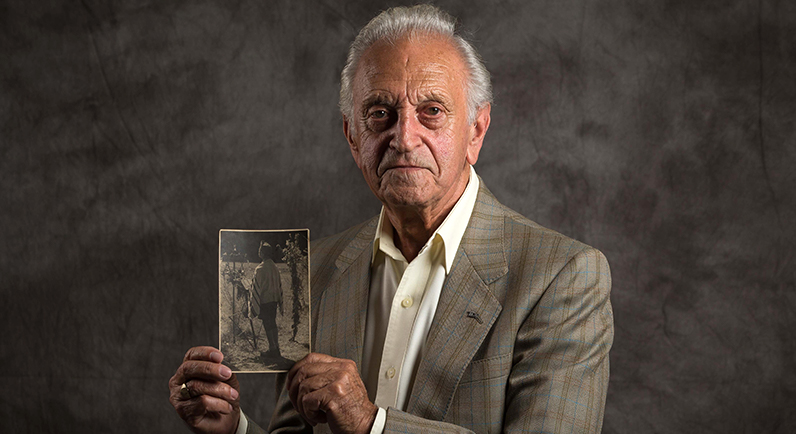