This month we introduce Holocaust survivor Jack Meister. Jack was born in Kielce, Poland, in 1928.

Jack grew up in Kielce. Jack recalls, as a child, he led a simple, happy life with traditional Jewish values. He was 11 years old when the Nazis came, and that marked the end of his childhood and his education.

In March 1941, Jack’s family was sent to the Kielce ghetto. Jack was ordered to do the menial, dirty jobs as he was a strong young boy and a good worker. These jobs included helping on building sites, cleaning out sewers, cleaning streets, and taking headstones off Jewish graves and using them to pave footpaths.

In August 1942, the ghetto was liquidated. When Jack came back from forced labour the day after liquidation, he found his family was gone, without any word of their fate. Until recently, Jack did not know what happened to them. He since found out that it is likely his brother died on a death march.

Jack was transported to Radom labour camp and worked in a factory for a year before being transported to Auschwitz, where he was tattooed with the number B488 on his forearm. Jack was then transferred to Buna concentration camp, which was part of the Auschwitz complex.

At the end of 1944, Jack was sent on a death march to Buchenwald. Many did not survive. German soldiers made the prisoners carry their backpacks and sometimes their guns. But Jack says they never through about escaping.

In April 1945, Buchenwald was liberated by American soldiers. The soldiers came into the camp and gave the prisoners food and drink. An America soldier gave Jack some chocolate and a change of clothes. He took Jack’s picture, then came back the next day and gave it to him.

Jack was taken to Switzerland after liberation, where he spent two years being re-socialised. He was taught there how to eat and how to behave. Jack immigrated to Australia at the end of 1949. 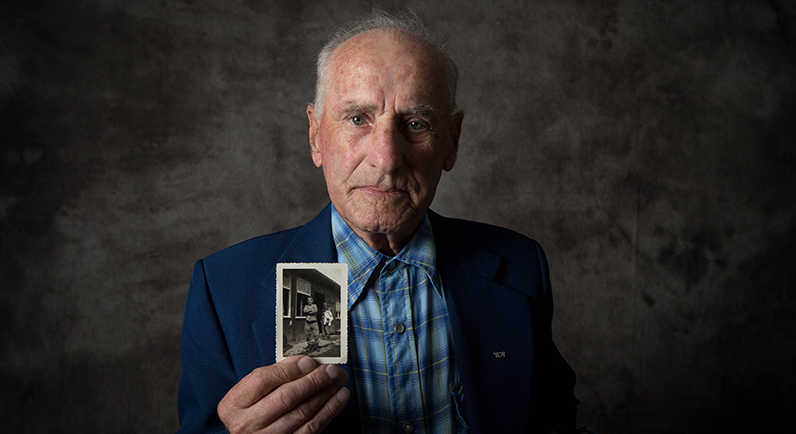 In this photograph, Jack holds a photo of himself, taken at the liberation of Buchenwald in April 1945.