This month we introduce Ilse Charny. Ilse was born in Vienna, Austria, in 1928.

Ilse was born to a comfortable middle-class family. Her father, Salm Zilbersain, was a prominent dentist and after the Anschluss, his practice was confiscated for use by a Nazi dentist. With no visa to a safe haven, the only place to go for the Zilbersain family was Shanghai, where all they needed was a passport, a taxation clearance, and enough money to buy tickets for a ship.

Ilse arrived in Shanghai when she was 10 years old. She tells of a vivid memory that has stuck with her; of a cattle truck onto which climbed European ladies dressed in their fur coats, hats and gloves. In all their glory, they were taken in by the UN Relief and Rehabilitation Administration and placed in a refugee camp with primitive facilities. The Zilbersain family was able to find a place to live in a poor Chinese area after a short time. Eventually, after the Japanese invaded, the Jewish ghetto was established, and they were absorbed into it.

Ilse’s father had the foresight to bring with him his dental equipment, which allowed him to work throughout the war years in Shanghai. Space was at a premium in the ghetto, so Ilse’s bedroom functioned as a dental surgery by day, after which she was allowed to roll out her bed. In addition to treating his immigrant patients, Salm was forced to treat Japanese soldiers who would turn up at his surgery unannounced. With rifles in hand, Salm has no option but to treat them, out of fear for his safety and his life. 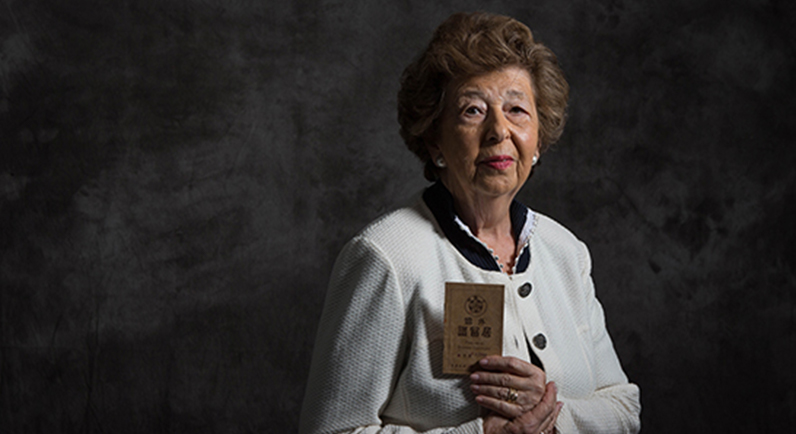 For Ilse, as a child, “Life went on.” Shanghai proved to be a culturally diverse safe haven. The Khadoori family were generous in their philanthropic protection of those like the Zilbersains living in the ghetto. Despite the deprivations in the ghetto, the family was saved from the terrible fate of so many of their fellow Austrian Jews.

Ilse remembers, “Our Chinese neighbours seemed unperturbed by our arrival and we never suffered any racism from them.” However, life was less pleasant once the Japanese arrived. Ilse eventually found her way to Australia, where she met her husband Abe.

In this photograph, Ilse holds documents issued to her family by the Committee for the Assistance of European Refugees in Shanghai, dated April 1940.

To read a book for young readers based on Ilse’s wartime experiences, purchase a copy of Year of the Dragon here.