Helen’s parents, Solomon and Amalia Freifeld, were both from middle-class families with traditional Jewish values, which they tried very hard to instil in Helen and her older sister Sally.

Helen survived the war in Radymno with her family, initially in a ghetto and then in hiding. Helen has no memories of this time, since she was a baby.

Helen explains that her post-war recollections, from when they emerged from their shelter with a Polish family, are muddy. She finds it difficult to tell today whether they are actual memories or things her mother told her.

One lesson Helen was determined to never forget was to be proudly Jewish, since anything else would have given victory to Hitler and the forces of evil, and desecrated the memory of all of the members of her family and the millions of other innocent Jews who lost their lives in the Holocaust.

After being liberated by the Russian army, Helen grew up in Przemysl, a town in the eastern part of Poland. There, she experienced many episodes of antisemitism. This was one of the many reasons for emigrating from Poland in 1959. At this point, Helen’s small family fractured; her mother and sister went to the US, and Helen, aged 18, came to Australia.

Helen’s father, who remained in Poland, is buried in the Jewish cemetery in Warsaw. He gave Helen the megillah she holds in this photograph. Helen kept this item with her when she immigrated to Australia, and donated Ito the Sydney Jewish Museum in memory of her parents. 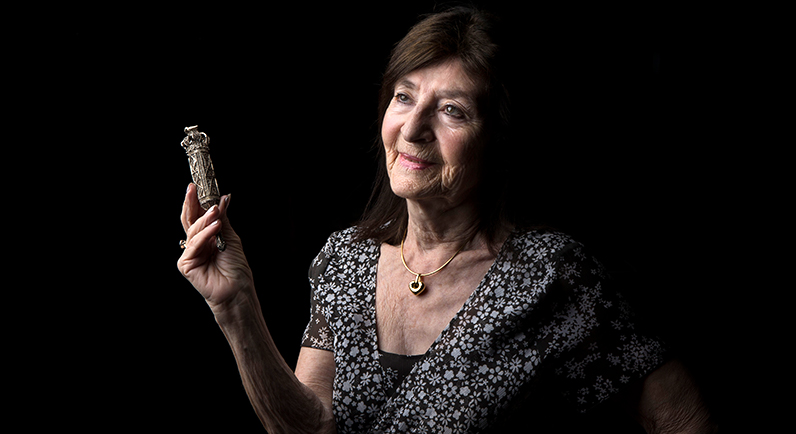 Helen’s parents, despite all odds, succeeded in making Helen and her sister Sally fiercely proud to be Jewish, and committed to the principles they lived by. It was from them that Helen learned compassion and tolerance, the understanding that no man is an island, to be open-minded and accepting and never take anything for granted.