This month we introduce child survivor of the Holocaust, George Sternfeld. George was born in 1939 in Warsaw, Poland.

George’s family fled Poland in 1940, escaping to Siberia, where they remained for the duration of World War II. Aside from the biting weather and remoteness from news of Europe, this exiled life in Siberia gave the Sternfelds some sense of security.

At the war’s end, George and his family returned to Poland, to the realisation of devastation and loss. After enquiring after the fates of their relatives, the Sternfelds held no hope in their survival. George explains, “There were no graves to go to. The air above Europe is their cemetery.”

As a proud, young Jewish man growing up in post-war Poland, early encounters with antisemitism affected George profoundly. Seeking empowerment and the discipline to set his life on a new course, George took up boxing and reinvigorated his lust for life.

In 1960, the Sternfelds jumped on the chance to immigrate to Australia. They had heard many glowing reports that Australia was a marvellous place of opportunity and great promise. Embracing his new country, George found a natural affinity for the Australian way of life: the people, the culture, the personal freedom.

George says, “Australia is my adopted home: I adopted it and it adopted me. I have a soul that is Jewish co-existing with a mentality that is Australian.”

Reflecting on his life, George acknowledges his journey in comprehending his history, in reconciling his identity as a Pole and as an Australian, but above all, in resolving his relationship with his Jewish identity.

George missed out on having his Bar Mitzvah when he was 13 years old. This missed milestone symbolised to George the Holocaust and its legacy. George’s belated Bar Mitzvah at age 66 in Jerusalem was the celebration of a rite of passage that was denied to him in his adolescent years, and symbolised his re-entry into the communal fold. 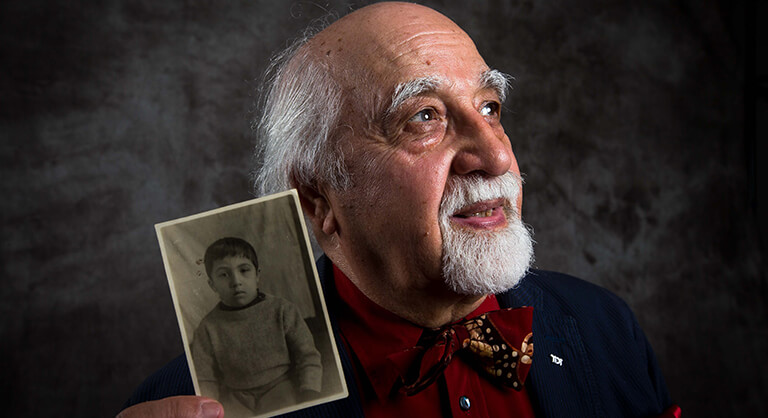 In this image, George holds a photograph of himself as a child in Siberia. It evokes strong memories of his childhood in the vast and remote area, where the temperatures could drop to minus 50 degrees centigrade.

George has written a book, titled Chocolate to Anzac Biscuits, which tells his full story of escape, survival and migration. For more details and to purchase a copy, click here.