On Refugee Week we share an interview with Holocaust survivor and founder of Seafolly, Peter Halas. Peter shares what made him resilient and how he and his family created success for themselves after surviving the Holocaust and fleeing from communism in Hungary.

SJM: As a recent migrant to Australia, how did you come to set up a successful business?

Peter: I arrived to Australia in 1957 with no family. Not speaking English, I had to take manual jobs until I learned the language. Once I learned enough English I started night school at the University of NSW. But, after 18 months I found it too difficult to work during the day and study at night, so I dropped out and became a salesman of ladies clothing selling to department stores and boutiques for a number of manufacturers. One of my agencies was a swimwear brand, Waterlily. After working with them for a couple of years they asked me to buy into their business. I stayed with them for 7 years, from 1968 to 1975.

We started the business Peters Folly on 1 July 1975. I sold my shares back to Waterlily and I started Peters Folly with my wife, Yvonne. Peters Folly was focusing on denim, which was the fashion rage at that time. So, I had extensive practical knowledge of the industry and swimwear in particular.

Later, in 1975, Waterlily closed down and it allowed me to move back into swimwear. We then renamed the brand to Seafolly. SJM: What drove you to be successful?

Peter: Initially, what drove me was the need to put food on the table. We were under capitalised, but both Yvonne and I worked very hard to make it a success. Yvonne in particular juggled looking after 2 children and the household, and working 6-8 hour days at the business.

Once the business got established, we looked for ways to expend. I could see the opportunity to create something of value. Yvonne by this time managed the PR and advertising and it was amazing how for little money she could get the attention of the press. 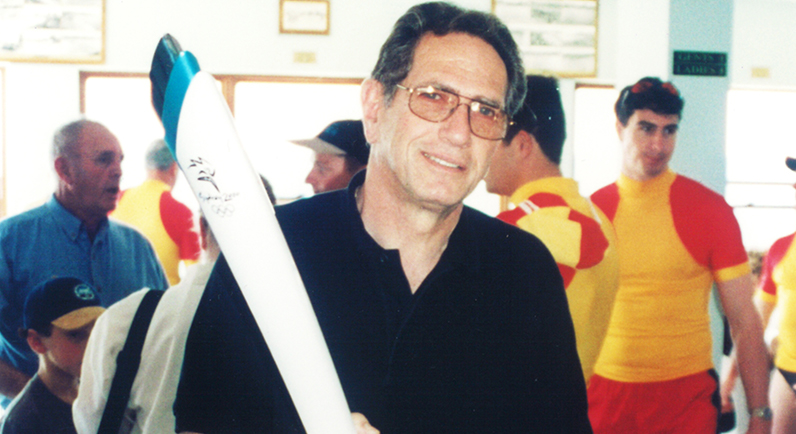 Photograph of Peter with the Olympic Torch at the 2000 Sydney Olympics. Seafolly was the licensee for the swimsuits. SJM Collection.

SJM: Why was it important to have the whole family involved in the business?

My parents and brother immigrated to Australia in the mid 1970s. Both my parents were in their mid 60s, but they needed to work. My father worked in the warehouse, my mum did the books, and my brother became a salesman, selling our products to shops in country towns of New South Wales. In fact, he liked the life in the countryside so much, that eventually he settled in Woolgoolga, a town on the far North Coast.

My daughter Simone worked in the business for a short while as well, doing various jobs. My son Anthony joined the business in around 1994, after finishing university. He started in the warehouse and worked his way through most departments. He learned every phase of the business, so that in 1998 he bought a half share of Seafolly and we became equal partners. Anthony got married in 1998, and Andy his wife also joined the business and got involved with marketing.

We had many very loyal and enthusiastic employees, but family was the most loyal. Family will always tell you how things really are rather than say things they think you might want to hear.

On my family, Simone married Paul Kanat from Melbourne in 1988 and Anthony married Andie Blashki in 1998. Both my children, Simone as well as Anthony, had 3 children each. They are now aged from 28 down to 14. Although Simone lives in Melbourne, we are a very close knit family visiting each other frequently. We also go on holidays together. Simone, after leaving Sydney and Seafolly to live with her husband in Melbourne, became a qualified psychotherapist and she built a successful practice. 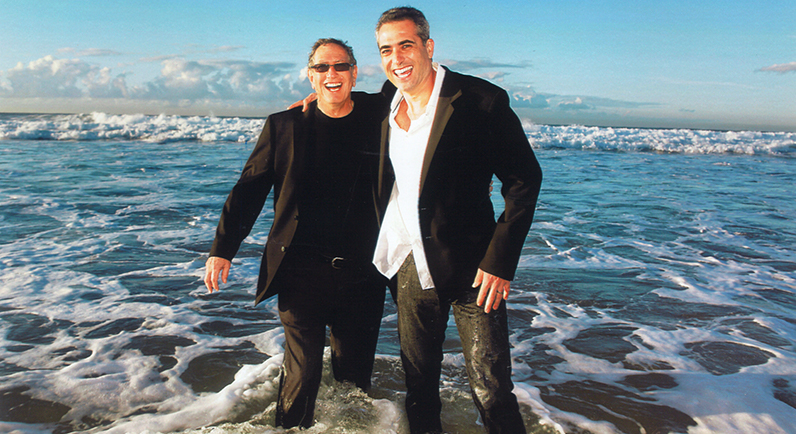 Peter and his son Anthony in a promotional photoshoot for Seafolly. SJM Collection.

SJM: Has your experience as a survivor and a migrant ever influenced how you operate in your professional life?

Having gone through the trauma of the Holocaust, Communism, the Revolution, escaping from Hungary and having arrived with not much more than the clothes on my back, I wanted stability, security and peace.

I was 17 years old and with no training or profession of any kind. I needed to find something that I enjoyed as well as something that I could start, with little capital. I only had my hard work to give.

In those early days a lot of retail shops were owned by Jewish immigrants. They saw in me a young Jew that they were prepared to give a go to. Most of my early customers came from the Jewish community. It took a lot longer to get myself established with the Department stores.

Yvonne and I got married very young. Yvonne was 18 and I was 21. We had our daughter two and a half years later. I had to support a family. I needed to create a safe a comfortable life for us. That was a huge driver. I took calculated risks, but it payed off.

You can hear Peter tell his story of survival of the Holocaust here, or read his survival story here.