The festival of Rosh Hashana is both a joyous celebration and the start of a period of ten days during which Jewish people engage in profound introspection and pray to inscribe their names in the Book of Life for the coming year.

To tie in with our exhibition, Jews from Islamic Lands, Racheline Barda recalls what the Jewish new year traditions were in her household in Egypt growing up:

In Egypt where I grew up with my three siblings, I remember it to be my favourite festival. One week before Rosh Hashana, it was customary for us children to grow some wheat in a shallow plate lined with damp cotton wool that would sprout just in time for Rosh Hashana. I suppose it must have been considered a good omen for the new year. It seems that this ritual was popular in Egypt and could have been borrowed from other religious communities, including the Christian Copts who observed a similar custom at some of their festivals.

Rosh Hashana nearly always fell at the end of our long summer holiday, just before the new school year. I really looked forward to going to synagogue mostly to meet up with my school friends and showing off my new dress specially made for that occasion.

The focus of this festival was primarily about the food. In our household, three culinary traditions coexisted: Sephardi because my father’s family originally came from Spain via Morocco; Syrian because my mother’s family came from Aleppo, and finally Egyptian since we lived there for the last two generations. My mother was determined to honour every one of these traditions. 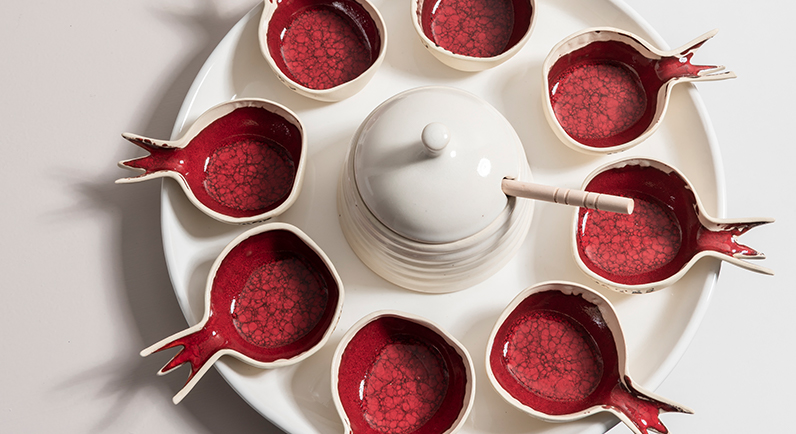 In Egypt, the ritual for the Jewish New Year went far beyond dipping apples in honey. As a matter of fact, we used to dip our apple slices in sugar, after dropping them first in water with lemon juice and orange blossom water so they didn’t brown. The meal my mother served was more like a mini seder and it entailed a long shopping list and a lot of preparations. It revolved around the eating of symbolic foods, or simonim, and the recitation of prayers that would transform these foods into wishes for the coming year.

Like for the Passover seder, where bitter herbs and matza symbolise suffering and freedom from slavery, the fruits and vegetables used at the Rosh Hashana seder all symbolised prosperity and sweetness for the coming year. The fish, a symbol of fertility, was served with the head to express the hope that we would always be at the head and not at the tail. The menu would include a stew of black-eyed beans with meat, a symbol of abundance, as well as rice, vegetable frittatas, omelettes, green vegetables, leeks, beets and more, all to augur a new beginning. 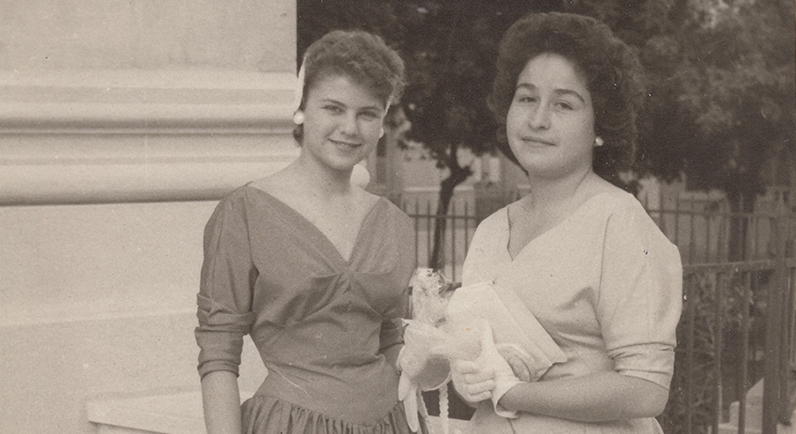 Racheline with her best friend at the synagogue of Alexandria

Sweet things held a central place in the Rosh Hashana fare. The crown was of course the pomegranate for its sweetness and its 613 seeds, said to symbolise the 613 mitzvot, or commandments. The sweets included candied home-made quinces, dates, gourd jam, pastries dipped in syrup such as baclavas and konafas stuffed with pistachios. I don’t remember anything sour, bitter or spicy was ever served. Even the salt and pepper shakers were removed from the table.

As I was checking one of my mother’s old cooking books to make sure I had not forgotten anything, I fell upon a couple of lines she had scribbled inside the book cover that brought tears to my eyes: A ma Racheline chérie. Rosh Hashana: Omelette 6 oeufs: poireaux et persil, blettes et céleri, confiture de courjettes – pumpkin. Here she was, still teaching me, still guiding me, while reminding me of our beloved traditions. Merci, Mamy.