Last year, we received a donation of a ceramic coffee mug. Even without hearing about its unique provenance, turning it over and reading the underside inscriptions was revealing: On the base of the mug is an eagle grasping a swastika in its talons as well as the manufacturer’s mark – Villeroy & Boch, Mettlach 1939. Mettlach in Germany has been the headquarters of Villeroy & Boch for over 200 years. 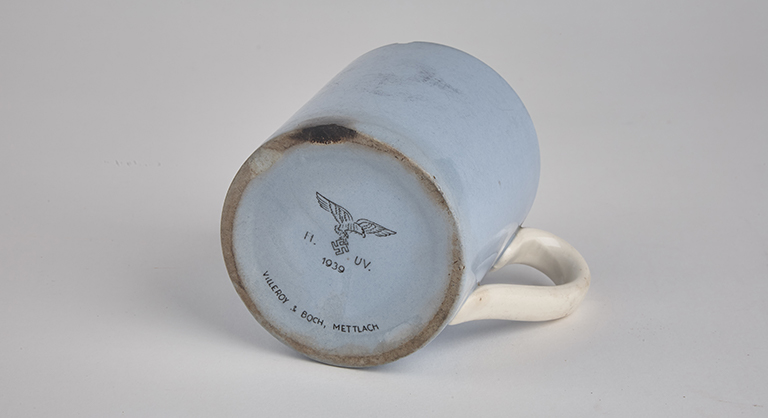 The mug, initially made for the German Luftwaffe (air force), belonged to Clasina Helena Cauveren, a prisoner from the Ravensbrück concentration camp. It was the only item she took with her from the camp after it was liberated by the Russians in April 1945.

Clasina was born in 1890. Though not Jewish, she was married to a prominent member of the Jewish community, Sidney Samson Cauveren, who was a director of the Amsterdam Diamond Building. Both were opera singers. The couple lived in Amsterdam and shortly before war broke out, Sidney bought a house in Nieuwe Herengracht, Amsterdam where they moved in with their four children. One day a Jewish lady knocked on the door asking for help to be hidden. Sidney and Clasina took her in, and then more Jewish people joined, including the husband and son of the daughter from Sidney’s previous marriage. Despite the tremendous risk to the Cauveren family, an ingenious hiding place was created for the Jews seeking refuge, concealed by a large kitchen buffet. There were four extra mouths to be fed. To avoid suspicion, groceries could not be bought in one store. Tosca Cauveren, then aged almost 14, recalls that she and her youngest brother went to various farms to get food.

In 1941 Sidney died of a heart attack. Clasina continued to hide the Jews after her husband’s death. On 4 June 1944 they were betrayed by someone who had been assured by the Nazis that his/her relatives would be released if they revealed where Jews were hiding. Tosca recalls two Sicherheitsdienst (Security Service of the SS) with revolvers forcing them out. Her mother begged them to leave her children because she had a handicapped son who needed taking care of. Clasina was deported together with the people she had tried to save. Regarded as a collaborator, Clasina was deported to Ravensbrück in Germany. She was forced to take part in some of the inhuman medical experiments conducted in the camp.

Following the raid, Tosca became an instant adult, left to look after the house and her brothers. Due to the ‘hunger winter’ (the Dutch famine of 1944-1945) she struggled to find food and ways to keep warm. “I got blocks of wood from under the tram rails to heat…I had to count the beans and calculate how long we could do with them.”

After liberation, Tosca received a telegram with the words, “I’m still alive. Your mother.” Her mother returned after her incarceration ordeal on 2 August 1945, weighing 48 kg, having recovered from Tuberculosis in a hospital in Lubeck. Following the war, she was unable to speak about her experiences in the camp. Clasina died in Amsterdam in September 1972. 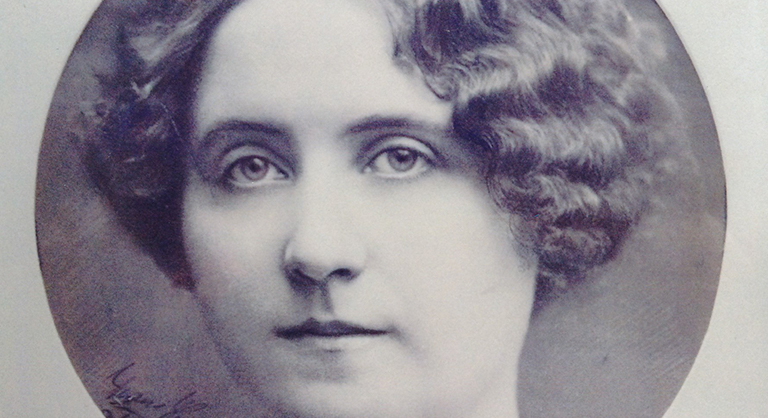 The mug was inherited by her grandson Sydney Raymond Cauveren.

His grandmother had shown him the mug: “Oma’s mug – I knew it had a history. It stood on the dresser with all her other ornaments. At least there is something left over from grandma’s life, something lasting from her war years”, the donor told us when he donated the object to the Museum.

At the Sydney Jewish Museum, we use artefacts – like the coffee mug – to reconstruct the history and transmit the many-sided stories of the Holocaust. This ordinary object being the only tangible link to a family that risked their lives and paid the price to save Jews.