The history of the Nuremberg Race Laws

Throughout history, Nuremberg has attracted much attention. Built in medieval times, the imperial castle there is the symbol of the city, its most striking landmark. Nuremberg is famous for its Christmas Market where renowned Nuremberg culinary specialities are sold, including Lebkuchen (gingerbread), Ochsenmaulsalat (ox tongue salad), Rost Bratwürste (grilled sausages) and Glühwein (mulled wine). Richard Wagner, a vicious antisemite, composed the opera, ‘The Master-Singers of Nuremberg’ in 1868.

Other historic events and sites linked to Nuremberg have also gained worldwide reputation. Nuremberg was a stronghold of the Nazis. The city provided the space for the annual Nazi party rallies. Concluding the Nazi party rally in September 1935, a special session in the German Parliament made public the Nuremberg Race Laws. These were to serve as the basic laws of Hitler’s empire, providing the ‘legal’ framework for the destruction of Jewish life. These laws were looked upon by Germans as the ‘Final Solution to the Jewish Problem’.

After the war, the Justice Palace is Nuremberg served as the court room where a handful of top Nazi leaders were held accountable for their heinous crimes. Here, the Nuremberg Laws were presented as evidence for the persecution and murder of the Jews. 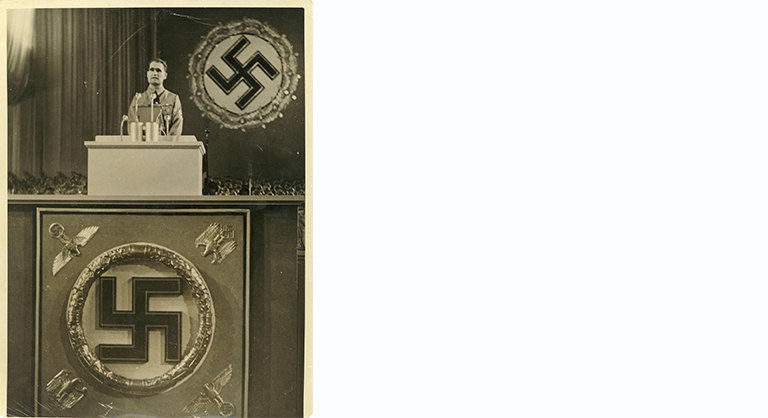 Reichsminister Rudolf Hess during his opening speech in the Luitpold Hall, probably taken during the Nazi Party’s conference when the Nuremberg laws were introduced. SJM Collection.

Here are the context, content and consequences of these infamous laws:

In 1919 Adolf Hitler, entering the world of politics in Munich, prophesied that the final aim of his anti-Jewish policy would lead to “De-Jewificaton”.

In 1933, after the Nazis seized power, insults, violence, arrests, ‘Jew-Boycotts’ and dismissals from public service marked the beginnings of the persecution.

From March 1935, a second wave of anti-Jewish riots swept through Germany. Nazi allies stepped up the persecution of the unwanted Jews. These riots were the precursor to the Nuremberg Laws. Officials who served in the Reich Ministry of the Interior, the Nazi party, SS agencies and other institutions had already discussed strategies to enforce the creating of clear distinctions between Jews and Germans. Jews were given a choice – albeit a dubious one – between being degraded in Germany or expulsion.

In early September 1935, a small team of ‘race experts’ was commissioned to hastily translate the Nazi’s core ideology of antisemitism into legislation. Four drafts were submitted to Adolf Hitler. One was selected, slightly modified and broadcasted on 15 September 1935, signed by The Führer. Nazi leaders revoked freedoms of the Jews in Germany and created a precedent for all anti-Jewish laws and regulations to remove the Jews from Germany, then Europe, and, ultimately, from the world.

The Reich Citizen Law established the fundamental distinction between Reichsbürger (citizens of the state) and Staatsangehörige (subjects of the state). Only Germans were declared citizens, entitled to political and civic rights. Jews were turned into subjects, deprived of these rights and stripped of their German citizenship. They became tolerated as German subjects until the time came to remove them once and for all. Jews escaping Nazi terror, seeking refuge in exile, were stripped of their German nationality. In November 1941, after the beginning of mass deportations to the killing fields in Eastern Europe, the 11th Ordinance of the Reich Citizen Law was issued. Jews “taking up residence abroad” – as the indirect language of the decree put it – ceased to be subjects of the German state. All property left behind by those deported and murdered was to be forfeited to the German state.

The second law – The Law for the Protection of German Blood and Honour – enforced the dismissal of female domestic servants under 45 years of age who were employed in Jewish households. A ban was imposed on Jews flying the national flag and the Nazi swastika. Permission was granted to display the ‘Jewish colours’: a white and blue flag marked with the Star of David. In order to secure the “purity of German blood” and to “safeguard the survival of the German Volk” the second Law also proclaimed: “Marriages and extramarital relations between Jews and citizens of German and related blood are forbidden”. Such relations were seen as a desecration to the Aryan race.

Denunciations, Gestapo investigations and trials followed. Culprits were humiliated in public, imprisoned or incarcerated in concentration camps and murdered. 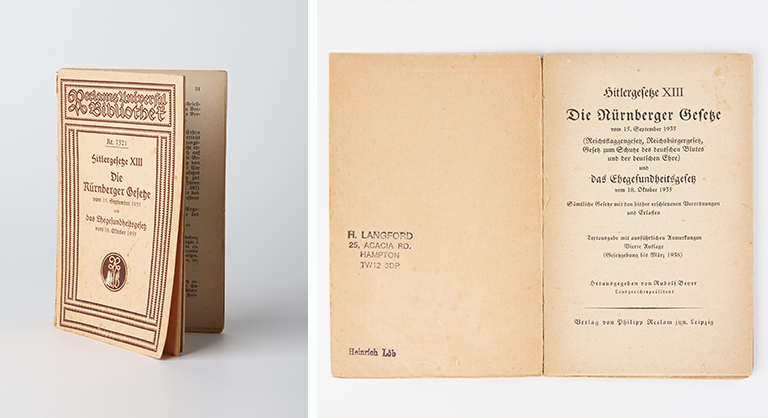 A 1938 pocket edition of laws and regulations issued by Hitler in 1935, consisting the Nuremberg Laws of 15 September 1935 and Marriage Health Law of 18 October 1935. SJM Collection.

The evolution of the Nuremberg Laws:

The implementation of the Nuremberg Laws required a ‘legal’ definition of the Jew. The First Supplementary Decree of the Citizenship Law, published on 14 November 1935, introduced the racial classifications. They determined the status and treatment of the victims. All people with three or four Jewish grandparents were regarded as Jews. Consequently, all Jews who had, in the wake of their assimilation, disbanded all ties with Judaism and converted to Christianity were reclassified as “Full Jews”. This status was also imposed on all converts to Judaism and non-Jewish members of the Jewish community. Two Jewish grandparents turned a person into a “Half Jew” or “First Degree Mischling”, colloquially known as “Jew Bastard”. A “Quarter Jew” or “Second Degree Mischling” had one Jewish grandparent.

Germans, regarded as “Aryans”, had to prove that they had no Jewish ancestors. The Aryan Certificate, mandatory for citizenship, marriage and employment, provided the necessary evidence. Although defamed and discriminated, mixed marriages in Germany and West Europe were, with some exceptions, spared the fate of Jews.

In 1933, German Jews responded to the ‘Jew-Boycott’ and the end of the perceived ‘German-Jewish co-existence’ with shock, despair and bewilderment. The Nuremberg Laws in September 1935 did not trigger such sentiments. Neither the Jewish suicide curve nor the number of refugees increased. The Laws were, as shown by the official statements of communal leaders, seen less as a threat than a clarification of the Jews’ social and legal classification. 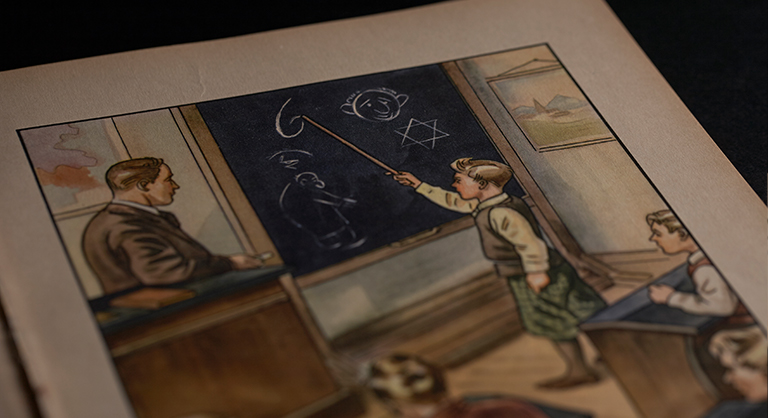 Page from antisemitic children’s book ‘The Poisonous Mushroom’, published by the Sturmer in Nuremberg, 1938. SJM Collection.

It took a direct threat to their lives to make most German Jews realise that their ties to Germany could no longer be maintained. Kristallnacht – the Night of Broken Glass – in November 1938 became seared in their consciousness and memory. Most Jews abandoned the notion that they still had any right to residence in Germany. Panic ensued, causing mass flight. By the autumn of 1941, almost 300,000 German Jews had escaped Nazi terror, two-thirds of the Jewish population of 1933.

The discussions surrounding racial classifications continued relentlessly both in Germany and in the conquered territories. In January 1942, Reinhardt Heydrich, Head of the Reich Security Main Office, attempted to change the Nuremberg Laws. At the famous Wannsee Conference he proposed including those of “Mischling” status into the program of the ‘Final Solution’. No consensus was reached. The participants of the Wannsee Conference agreed to postpone the problem of ‘mixed races’ in Germany and Western Europe until after the ‘final victory’.

After the war copies of the Nuremberg Laws were submitted to the International War Crimes Tribunal. The originals were regarded as lost. It took many years before they resurfaced. As it happened, they had been confiscated in 1945 by a team of the US Counter Intelligence Service and handed over to General George S Patton, the celebrated, controversial Commander of the 3rd US Army. Patton was well known for his antisemitic sentiments. Disobeying superior orders, Patton regarded the Nuremberg Laws as a private, personal war trophy. Discovered long after his death in his home in California, they were transferred not to the German Federal Archives but rather to the US National Archives.