This blog piece is the second of the series of conversations between our Curator of Collections Shannon Biederman and Assistant Curator at the Museum of Applied Arts and Sciences, Damian McDonald.

In this Q&A, Shannon and Damian discuss the crossovers between the Jewish music personalities who feature in MAAS’s collection and the icons whose records appear in our current exhibition, Jukebox Jewkbox! A Century on Shellac and Vinyl.

Damian: The Museum of Applied Arts and Sciences holds many similar examples of the music technologies in Jukebox Jewkbox!, and it is great to see them exhibited in this context. Another interesting crossover of the collections of MAAS and the Sydney Jewish Museum is the documentation of the artists and promoters in Australia’s music industry. Two people featured in Jukebox Jewkbox! caught my attention – promoter Lee Gordon, and musician Deborah Conway; both of whom are people in the Australian Jewish community who had a great impact on the music industry. And both are features of the MAAS and SJM collections. I was interested to find out how these people are important in the context of Jukebox Jewkbox! The Museum of Applied Arts and Sciences has documented the career of 1950s and 1960s entertainment promoter Lee Gordon with collections of material related to his management business. MAAS holds photographs and programs from the office of Lee Gorgon’s company, Big Show. These include Louis Armstrong, Nat King Cole, Johnnie Ray and Harry Belafonte. The tour by Bill Haley and His Comets in January 1957 was the first of many rock ‘n’ roll tours promoted by Lee Gordon. Another highlight of MAAS’s performing arts collection is the costumes worn by Australia’s original rocker Johnny O’Keefe – whose career was greatly helped by Gordon.

Shannon, can you talk a little bit more about Lee Gordon, and why it was important to include him in Jukebox Jewbox!; and also how Gordon is regarded by Australia’s Jewish community?

Shannon: Members of the community interested in music are certainly aware of Lee Gordon. In fact, it is through the community that I came to learn about him. Gordon certainly wasn’t religious, to say the least, nor was he involved in the community. I think quite the opposite; he was worried about being labelled as a ‘Jew’ and there are anecdotes that he concerned about having a ‘Jewish nose’. His immense impact on the Australian music scene is undeniable, which is why we wanted to include him, but also looking at others who came after, such as Michal Coppel, another promoter who brings out huge international acts. An interesting connection, Johnny O’Keefe, who was very close to Gordon was signed by Festival Records, which was founded by Paul Cullen, was very involved with the Jewish community.

Musician Deborah Conway is another person featured in Jukebox Jewbox! whose career has been documented by MAAS. Conway is a prolific performer who has made a successful career for herself not only in the music industry, but also as a model and actress. The Museum of Applied Arts and Sciences holds in its collection Deborah’s beautiful Astro-Jet electric guitar, made by Gretsch. The Astro-Jet is an interesting guitar as an object, along with having been owned and played by Deborah Conway. In 1964 Gretsch guitars wanted to create a hip, space-age image with their new, modern guitar design. They chose to name the model the Astro-Jet, inspired by the television cartoon The Jetsons! 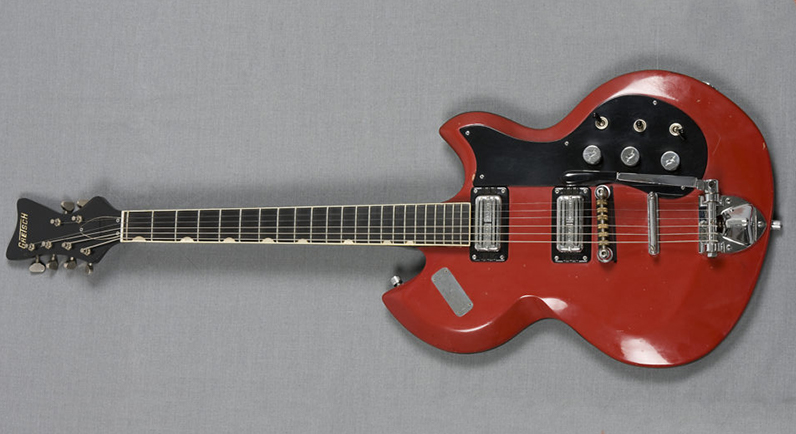 Electric guitar with case and accessories, ‘Astro-Jet’, made by Gretsch in the USA, used by Deborah Conway in Australia during the 1990’s. MAAS collection: 93/236/1. Photo: Nitsa Yioupros, MAAS

Damian: Can you to tell me more about Deborah Conway, particularly her contribution to Australian music, and how her identification as a Jewish woman has helped shape her career?

Shannon: Conway’s Jewish and musical identities are intertwined. She has made huge contributions to the Australian music scene since the 1980’s, but it wasn’t until he later albums Stories of Ghosts and Everybody’s Beginning that she explores Jewish themes in search of wider truths. These latter two albums were done with her partner of 25 years, Willy Zygier, with whom she not only shares a career but three children. He is also from a Jewish family, though they describe themselves as “atheists who are very Jewish’’. They are involved in the Australian-Jewish music scene as co-curators Shir Madness, the Jewish music festival.

Jukebox Jewkbox! A Century on Shellac and Vinyl is on display now. For more exhibition details, click here.