Justice in Australia – A special visitor

Recently, a visitor to the Sydney Jewish Museum revealed that he had worked as a Senior Investigator for the Special Investigations Unit of the Federal Attorney-General’s Department, which was set up to investigate war criminals residing in Australia following World War II.

It has been estimated that between 4,000 and 5,000 war criminals found sanctuary in Australia after WWII. The Special Investigations Unit (SIU) was commissioned during the 1980s to examine war allegations made against Australian citizens or residents, and to collect documentary and eye-witness evidence and prepare cases for trial.

Robert Gray, who worked in the SIU from 1987 to 1989, said he was incredibly moved during his visit to the Museum. Of particular impact on him was the ‘Justice in Australia’ exhibit, which displays the unearthing of a mass grave in Serniki in eastern Poland. 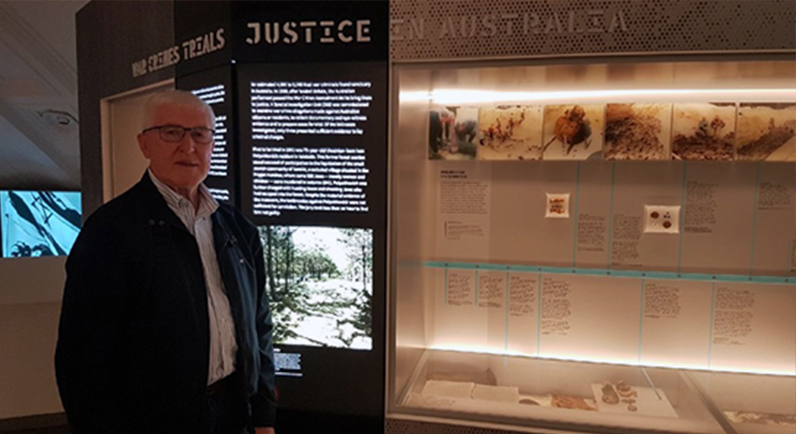 In August 1987, Robert Gray accompanied the late Bob Greenwood Q.C. (Head of the SIU) to Israel, the former Soviet Union, the United States of America, and West Germany. The purpose of their visit was to bring attention to those governments about Australia’s resolve to investigate allegations of war crimes and, where appropriate, lay charges. The seven-country tour received press in Australian Jewish media. On his visit to the Museum, Gray brought with him a copy of Vic Alhadeff’s article in the Australian Jewish News from August 1987, entitled ‘Investigator to visit Russia, Israel and US: Australia’s official search for evidence on war criminals’.

Robert met the Museum’s Resident Historian, Konrad Kwiet, who was appointed as Chief Historian at the Australian War Crimes Trials shortly after Robert left his position.