‘’I always say God paints the last brushstroke on my portraits, because I leave them to mature for a few weeks after I’ve finished them and when I come back to them, they seem to look different’’

The Museum recently received five paintings from the estate of acclaimed artist, Judy Cassab (1920-2015). Her work, represented in galleries and museums within Australia and internationally, is testament to the pioneering craft of a woman who defied the confines of gender and status, to reshape the art world in Australia.

Born Judit Kaszab in 1920 in Vienna, Austria, Judy was raised by her mother and grandmother in Beregszász, Hungary, where she studied art. She painted her first portrait at the age of 12 and went on to study art in Prague and at the Budapest Academy. Her studies were disrupted by Nazi occupation and her subsequent time in hiding, “…it was the first time in my life that I was not a girl, not a woman, not a human being, but a Jew”. Most of Judy’s immediate family was murdered in the Holocaust. In 1951, she migrated to Australia with her husband and two young sons.

Her first solo exhibition held at the Macquarie Galleries in Sydney in 1953 was the beginning of a long and celebrated career. Judy went on to win the Archibald twice, first in 1960 with a portrait of Stanislaus Rapotec and later in 1967 with the portrait of Margo Lewers. The awards and accolades continued into her later life.

Of the five pieces donated to the museum, four are portraits painted and drawn prior to the outbreak of World War II. Even in these formative years, Judy’s technical capabilities and her ability to capture the sitter’s ‘inner person’ as well as their likeness are evident.

Judy would go on to refine her portraiture into her early nineties. Painting for pleasure, her work was rendered complete, but not overworked or ‘finished’; she often added last minute touches described as the ‘vital marks which somehow pin one’s soul to the canvas’. Imbuing her portraits with an interpretive dimension, a specific element of her paintings were the subject’s eyes, which were always her starting point. She referenced this in her diaries, noting, “Whereas I probably wouldn’t place a highlight on a china cup, I mostly paint one in the eyes. It’s a magic moment when the eyes come alive and look back at me.” Both portraits of her parents seem to speak with their eyes, conveying the complexity of the relationship between parent and child. 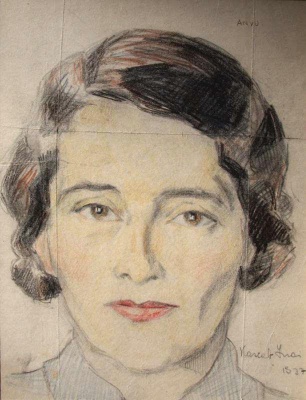 ‘The Morning Paper’, which features the artist’s husband, Jancsi Kampfner does not appear contrived or set up. There is something deeply personal in the work, capturing her subject in an ordinary, quiet moment at home; for a brief second the viewer is privy to the private world of the artist and perhaps the inner character of the sitter himself. Jancsi, a survivor of the Hungarian labour camps, encouraged Judy to embrace her work and channel her experience through her brush. Together they endured the hardships of war, migration and the inevitable ups and downs of marriage. Their love was enduring. Jancsi died in 2001. 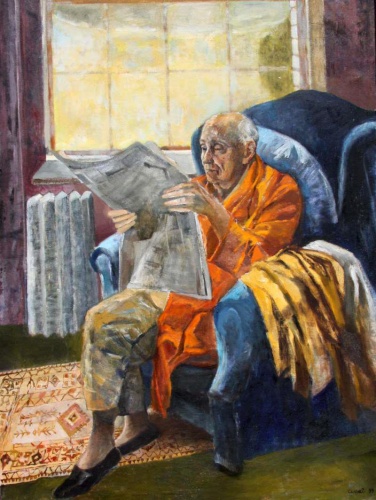 Judy was a pioneer; she balanced a family life and the demands of a public career, forging her place in a domain often reserved for men, casting aside her status as a migrant and the obvious deterrents in her path.