Despite the horrific conditions of the Nazi camps, prisoners tried to maintain control over their own bodies in whatever ways they could. Sometimes, being able to make a small change to one’s clothing—whether sewing a secret pocket on the inside of a uniform or mending a seam—gave prisoners a sense of control in a world where they had very little.

Underwear was one way for camp inmates to do this. Underwear or short ‘bloomers’ made of striped cloth, issued to Irene Weiss in Auschwitz. SJM Collection.

In some instances, prisoners were issued with undergarments in the camps, or acquired them in other ways. In the Sydney Jewish Museum’s collection is a pair of rather old-fashioned bloomers, created with a striped fabric. These bloomers belonged to Irene Weiss (née Berger) who wore them during her incarceration in Auschwitz. In her testimony, Irene described the sewing workshop at Auschwitz, in which seamstresses made other items of clothing, too. In fact, in the Museum’s collection is a shirt in the same striped fabric, which begs the question of whether these bloomers were a one-off piece or part of a larger production order.

Many female survivors have spoken about the trauma of having no underwear in the camps. In her testimony recorded at the Sydney Jewish Museum, Judith Nachum (née Lachowitz) described how distressed she felt at not receiving undergarments when she arrived at Auschwitz-Birkenau.

“And I was in hysterics,” Judith recalled, “I just wanted a pair of underpants!”

Susan Karas (née Zuzana Kardos) also recalled her distress at the lack of underwear. Later, as a slave labourer at Oberhohenelbe, a subcamp of Groß-Rosen, Susan acquired fabric, scissors and a needle and, using the thread pulled from her blanket, made her own underwear and shoulder pads for her frock. This was a small way she was able to regain some control and improve her appearance.

The concept of ‘fashion’ in camps was very different to fashion in the period before the Holocaust. During the war, ‘fashion’ referred to ways that clothing could aid survival.

Rosa Fridman (née Yazovski), for example, described herself as the most fashionable woman in Stutthof after acquiring a pair of boots to replace her wooden clogs. However, sometimes ‘fashion’ was about keeping an appearance of dignity and humanity in the face of barbarity. 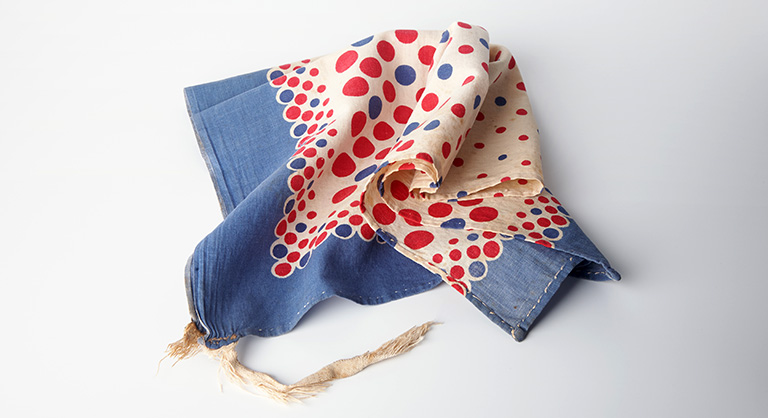 Portion of a scarf, with blue and red polka dots, that belonged to Magda Spira. SJM Collection.

A scarf belonging to the late Magda Spira (née Edelmann) is also an interesting example of this. The scarf’s cheerful polka-dotted design would not have been out of place in a pre-war, central European fashion magazine. How Magda came into possession of this chic accessory is a remarkable story. Deported from Auschwitz to the Kaiserwald concentration camp in 1944 at the age of 19, Magda was given the task of sorting through the personal belongings that were taken from incoming prisoners, collecting valuables for the SS. One day, Magda found a gold coin, which she decided to pocket and use to buy extra rations—a risky decision that could have cost Magda her life. Magda used the coin to buy a piece of bread, which she then traded for half a scarf to wear over her shaved head.

“I just wanted to look better because my head was shaved,” she stated in her testimony, “It was vanity.”

When we consider the starvation of prisoners in the camps, trading extra food for an accessory like Magda’s scarf is no casual act. The desire to look dignified, even in one of the worst chapters of human history, plays a very important role in what makes us human, and clothing was central in this way. The decision to trade extra food for a scarf or to make oneself a pair of underpants can be seen as an act of rebellion and a desire for control—however small it may be—over one’s own body.