Two orphaned brothers, separated after the deaths of both their parents, were reunited after more than a decade in the trenches of the Gallipoli battlefield. The story of such a fortuitous reunion recently crossed our curators’ desks.

Barney and Jacob (Jack) Grimish were sons of Jewish parents, Samuel and Emily Jane Grimish. After the deaths of Samuel and Emily Jane in 1901 and 1902, Jack remained in Brisbane, later becoming a barman and then enlisting in the 9th Battalion of the Australian Infantry Force in 1914 at the age of 25. At the age of 8, in 1902, Barney was taken into care at the Government-run Diamantina Orphanage in Brisbane with his two sisters. In 1915, he worked as a farmhand in Yanco, New South Wales, before enlisting in the 1st Battalion of the Australian military. 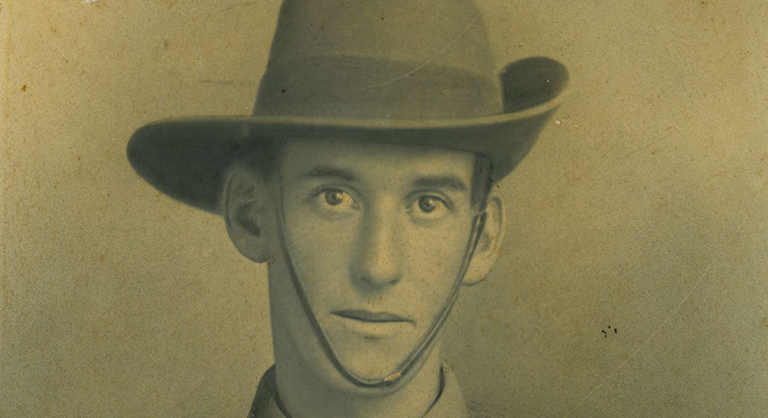 Since their separation in 1902, neither Barney nor Jack were aware of the other’s whereabouts, let alone their shared military pursuits.

Following their surprising reunion, Jack wrote to his uncle, Baron, “I have met Barney after fifteen years! I think this is a record for brothers to meet after such a length of time on the battlefield.”

Barney was transferred to the 9th Battalion and so the brothers served together until June 1916. On 9 June 1916 Jack was medically discharged for chronic bronchitis and was sent back to Australia, travelling aboard the Themistocles. Unfortunately, Jack would not see his brother again. 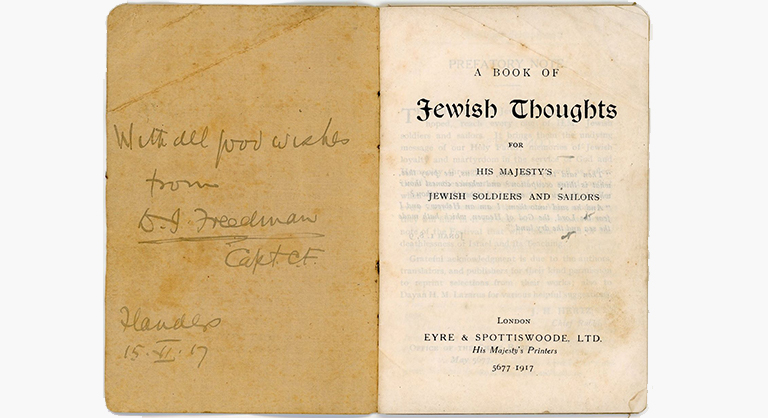 Prayer book used by Corporal Barney Bernard Grimish during his military service in France during World War I. The prayerbook was found among Barney’s personal effects when he was killed in the Battle of Amiens, France in 1918. SJM Collection.

Barney continued to serve and move up the ranks. His Battalion was deployed to the Somme region in France, and fought in battles at Poziéres and Ypres in Flanders. He was heavily involved in the German Spring Offensive in March 1918.

Under General Monash’s command, Barney’s battalion participated in the Last Hundred Days campaign in Amiens, France, in August 1918. Whilst a crucial campaign for the war’s success, the Australian corps suffered heavy casualties. On 11 August 1918, aged 25, Barney was killed in action at Harbonnieres, France. 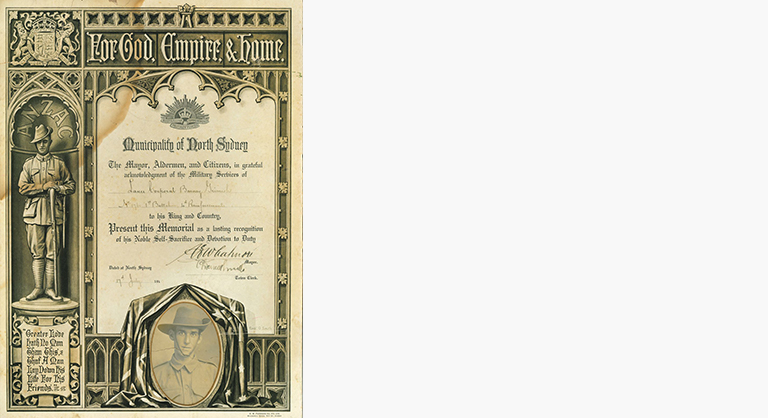 Memorial honour certificate commemorating the service and death of Lance Corporal Barney Grimish. This certificate was presented by the Mayor, Aldermen and citizens of North Sydney in 1919 as a ‘lasting recognition of his Noble Self-Sacrifice and Devotion to Duty’. SJM Collection.

Based on incredible luck and camaraderie, the story of the Grimish brothers’ reunion in the trenches of Gallipoli adds another layer to what we know about the personal experiences of wartime for Jewish Australian servicemen.

Learn more about our exhibition on Jewish servicemen and women in the Australian military, Serving Australia.