Today, on Anne Frank’s birthday, we are taking time to reflect on the experiences of Jewish men, women and children in hiding during the Holocaust. These people often had to deny their Jewish identity and rely on non-Jews to hide them for days, months or even years. They slept and lived in attics or cellars, storerooms or sheds, workshops or garden houses, and even in underground bunkers.

For children, life in hiding often meant the possibility of survival but also separation from and loss of family. Many children, who were placed in Christian schools and orphanages or with courageous individuals to avoid deportation, grew up in isolation at terrible cost to their physical and emotional development.

Here are two stories of hiding told through some of the most recent acquisitions in our collection.

Jacqueline was born in Paris on 18 January 1931 to Pessa (Paula) and Icek (Isaac) Feldman. Her parents were Polish Jews and married in 1929, shortly after they moved to Paris. Isaac was a tailor and served in North Africa with the French Foreign Legion until 1940. He returned to France but was then arrested by French authorities in May 1941. He was deported to Pithiviers Internment Camp in 1941 and deported to Auschwitz in July 1942, where he was murdered.

After her father’s arrest, SS officers arrived at Jacqueline’s apartment to take her family to a camp, but they managed to hide. They had been warned by the concierge of an imminent German round-up of Jewish women and children and were able to leave before being discovered. They travelled by train to Limoges, where they were forced to live on the street. Without food and shelter, their mother was on the verge of giving the family up to the authorities when she was approached by a woman from the French Resistance. The partisans hid Paula on a farm where she would work as a maid and arranged contact with the Oeuvre de Secours aux Enfants – a children’s aid organisation – to facilitate the hiding of the children separately in orphanages. During this time, their mother was unaware of their whereabouts.

Jacqueline was sent to De l’ecole Du Couret; an orphanage in the French town of Couret. Meanwhile her brother Charles was sent to a nursery. Jacqueline recalls that there were rumours about children being taken from the orphanages and they participated in drills to ready them to escape.  She remembers being very afraid and aware of the events around her. Photograph of Jaqueline in an orphanage in Poulouzat in the South of France, where she was in hiding in 1943. Jacqueline is pictured in the front row, second from the left. SJM Collection.

She was moved after about a year and was reunited with Charles at this orphanage in Poulouzat. When Poulouzat was attacked by German soldiers, Jacqueline and Charles moved to a Catholic orphanage in Castera-Verduzan in the Haute Pyrrenees region of France, where they stayed from 1943 until 1945. They tried to assimilate into Catholic culture and were told to hide their Jewish identity. Jacqueline found it hard to explain to her brother that he could not tell anyone that they were Jewish. At the age of 4, he was confused by that.

After liberation, Jacqueline was taken to two chateaus where she learned sewing, which later helped her get a factory job when she returned to Paris. She migrated to Australia in 1949, aged 18, with the help of the OSE. Her brother joined her a year later. Photograph of Jacqueline, her mother Paula and brother Charles in 1941, a year before they were forced into hiding. SJM Collection.

Jacobus Cornelis was the son of Cornelia Berkelouw, born on 18 August 1925 in Rotterdam. Despite increasing persecution of Jews following the German occupation of the Netherlands, Cornelis was able to continue his schooling until the end of 1942. At some point after this Cornelis was interned and shipped east, but his train was bombed and he managed to escape. He found a farm near the forest in Beltrum where a family was willing to hide him along with a small group of other Jews. He hid from SS officers in a barrel of offal with a straw for air, and managed to stay concealed there despite the SS bayoneting the barrel. Afterwards the family walled him into the chimney where he stayed for three days while things died down. He spent the rest of the war in hiding on the farm. 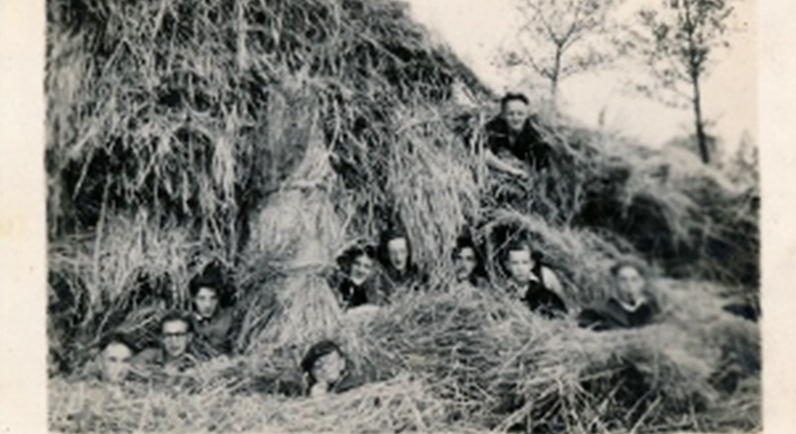 Photograph of Jacobus Cornelis Berkelouw (second from the left), partially concealed in a haystack in April 1945 with a group of men who were hidden by a family in Beltrum, the Netherlands. SJM Collection.

Before the war the Berkelouw family was headed by Hartog Carel and his wife Henriette. They ran Berkelouw Books, a family business spanning four generations. Hartog had been instrumental in setting up the bookstore in Rotterdam, earning Berkelouw Books international esteem and membership to the prestigious International Antiquarian Booksellers Association. Hartog and Henriette’s children included Sientje, Hendrika, Cornelia (mother to Cornelis), Levie (Leo), Carel, Elizabeth and Isidoor; who mostly all worked at Berkelouw books. In May 1940, the business was bombed during the siege of Rotterdam.

Cornelis survived the war and went on to serve in the Dutch Army from 1946-49 in Java, Indonesia. He immigrated to Australia in 1949, arriving in Sydney on 11 October. His mother Cornelia died the following year. Leo, Isidoor and their families also made it to Australia, where Isidoor re-established Berkelouw Books. Hartog and Henriette, Sientje, Hendrika, Carel and Elizabeth were murdered during the Holocaust. Photograph of Jacobus Cornelis Berkelouw (standing, eighth from the left) outisde the cottage near the forest in Beltrum, Netherlands, posing with a group of other Jewish men, women and children who spent the last years of the war together in hiding. SJM Collection.