“Jewish Youth!… Do not be led astray. Of the 80,000 Jews in the ‘Jerusalem of Lithuania’ (Vilna) only 20,000 are still alive… Hitler aims to destroy all the Jews of Europe. Let us not go as sheep to the slaughter! True, we are weak and defenseless but resistance is the only reply to the enemy. Brothers! It is better to fall as free fighters than to live by the grace of the murderers. Resist! Resist with your last breath!”

These are words from Abba Kovner’s electrifying Ghetto Manifesto, released on 1 January 1942. Three weeks later, the United Partisan Organization was born; its stated aim was to resist the Nazi assault. Many obstacles, however, prevented a ghetto revolt. Instead, Jews from Vilna and other ghettos escaped and sought refuge in forests. Two motives determined their decision to join the partisans: survival and revenge. One of the Jewish partisan units, operating in Belarus, adopted the name Nakam, the Hebrew word for revenge. Abba Kovner fled Vilna in September 1943. His partisan group was called Avengers. 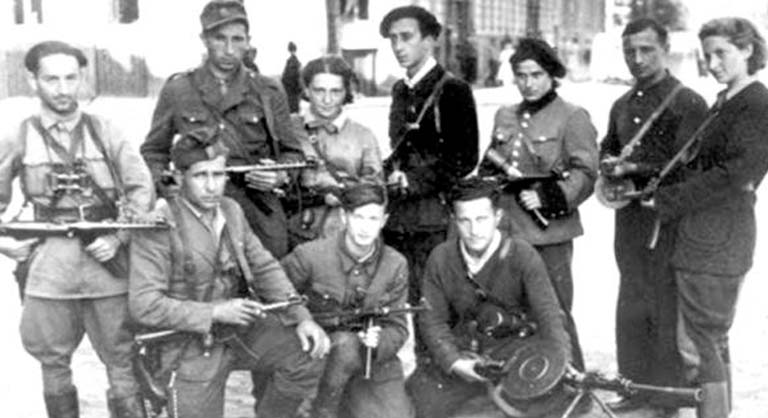 Partisan warfare did not permit the taking of prisoners of wars. Captured German soldiers, SS and police men were killed on the spot – shot or hanged, stabbed or beaten to death. Valuable belongings were confiscated – uniforms and arms, boots and food, documents and money. Corpses were hastily buried in unmarked graves. Some Jewish partisans refused the order to kill, arguing that the murderers of Jews should be subjected to the rule of law and punished by the courts. Those who followed the order emphasised the desire for revenge as their main motive. One estimate puts the number of Germans killed by Jewish partisans at over 3,000.
After the war the revenge killings continued. Abba Kovner recruited a new group of avengers which took on the old name Nakam; 50 partisan fighters and Holocaust survivors, seeking revenge for the murder of six million Jews. Other avengers emerged in the British Mandate of Palestine. These were members of the Jewish Brigade who had defeated Hitler’s armies in Europe. Among them was a special combat unit comprised of 40 German and Austrian Jews who had been secretly recruited and trained for their mission: to carry out revenge killings. No statistics disclose the exact number of Germans and Nazi collaborators who were hunted down and killed. One estimate puts the figure at 300.

Other efforts were made by Nakam to translate the biblical phrase ”An eye for an eye” into reality. One operation (‘Plan A’) envisioned the poisoning of the water supply in German cities, targeting the cities of Hamburg, Frankfurt, Nuremberg and Munich. The attempt failed as the poison could not be delivered to the assassins. The second major attack (‘Plan B’) was launched against prisoners detained in an American Prisoner of War (POW) camp in Nuremberg. Members of Nakam broke into a bakery that serviced the camp and inserted poison into the bread; however, the poison used was not strong enough to cause death. 2,200 prisoners fell ill, 207 requiring hospitalisation. American and German investigations were carried out but then abandoned “due to unusual circumstances”. None of the avengers were ever held accountable. By the year 2000, four of the group were still alive. They broke their silence and spoke about their efforts to seek revenge for the murder of Jews perpetrated during the Holocaust. They showed no remorse, referencing the biblical phrase: “an eye for an eye”. A US lieutenant and a German detective inspect the Konsum-Genossenschaftsbäckerei in Nuremberg after a poisoning attempt, 1946. Public domain.

After the failure of their operations, the avengers withdrew from Europe, most of them settling down in the newly established state of Israel, which in 1950 proclaimed its “Nazis and Nazi Collaborators Punishment Law”.

Yet, a handful of Jewish partisans and agents of Mossad attempted to trace, punish or even kill the murderers of the Jews. Nazi war criminals who had escaped criminal prosecution lived in constant fear of being hunted down by the avengers. An historic event kept this fear alive: the kidnapping, trial and punishment of Adolf Eichmann in the early 1960s.

Over 31,000 Holocaust survivors rebuilt their shattered lives in Australia; among them there were numerous former partisan fighters. At the same time, tens of thousands of “displaced persons” from Europe found a new home in Australia; among them were some 4,000 to 5,000 perpetrators, men who had engaged in the murder of Jews. There is a rumour that speaks of Jewish revenge killings in Melbourne. A decorated partisan, once a member of Nakam, is supposed to have killed men who had murdered Jews during the Holocaust and who had later found a new home in his adopted city.

Danny Ben Moshe’s Identity Film Company is currently making a documentary entitled “Revenge”, which aims to shed light on an Australian case of “an eye for an eye”.