A friendship book rescued from a second-hand bookshop

A small ‘autograph book’ or ‘friendship album’ kept by a young German girl came into our possession in 2015: it had been rescued from obscurity from a second-hand bookshop in Bondi in the mid-1980s. How it came to be there one can only speculate.

The book was found by a historian, Dr Michael Connor, who recognised the significance of the artefact. After a friend translated the German entries, his instincts were affirmed.

The book contained some 62 pages filled with dedicatory inscriptions in German, and after the owner arrived in Australia, in English. The donor discovered the original owner: Nelly Merel, born in Berlin in 1929.

“I always wanted to find the right home for it. I didn’t want to give it to a state or university archive as I wasn’t sure they would understand how personal it is and what a story it tells, and I didn’t want it hidden away in the bottom draw of some enormous archival collection.”

Upon donating the artefact to the Sydney Jewish Museum, he wondered whether perhaps we could reunite Nelly with it. 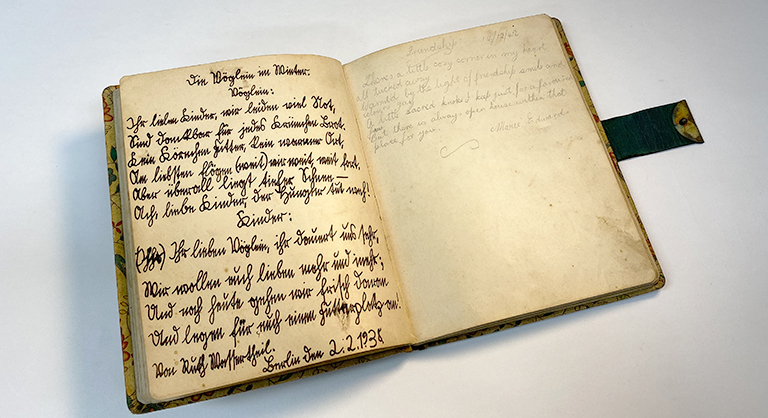 Nelly’s parents, Mendel and Cecile Merel, “created a haven inside the home while the world was in turmoil”, as she describes in her Shoah Foundation testimony. Outside the home, seven-year-old Nelly experienced bullying on the way to school. She was called a dirty Jew but couldn’t understand why, as she kept “shiny and clean”. On one occasion, she and her younger brother Larry were pushed around by a group of Hitler youth, who then trod on her feet until they were bloody. For months afterwards her mother had to carry her around. Around the same time, someone threw a rock at her father’s head; then, someone informed the Gestapo that he was a communist. One evening, he was arrested and interrogated.

A German neighbour who assisted his release told him, “If I was you, I wouldn’t stay.” Anxious to leave Germany, Mendel decided on Australia even though they didn’t know much about it other than there were “kangaroos hopping in the streets.”

The family left Berlin on 10 February 1938, travelling via Paris and New York (to say goodbye to family), and on to Canada to catch the boat to Australia. They arrived in Australia on 10 April 1938, with little of value, other than what Cecile had hidden amongst some sheets. Nelly brought her autograph book.

Nelly and her brother went to Bellevue Hill Public School and quickly learned English, hoping to feel a sense of belonging. She recalls being teased for her clothes, “I only had two dresses to wear to school, one in the wash and one on me.”

Nelly’s parents tried desperately to get the family out from Europe but without success; most of them perished in the Holocaust.

Nelly’s son Greg Weiss was the first to view the autograph book. The Museum’s curator at the time, Dr Jana Vytrhlik, gave him white gloves to carefully turn the pages – the book had transitioned from the public domain where anyone in the bookshop could thumb through it, to special handling in controlled museum conditions! Greg immediately recognised his grandfather Mendel Merel’s and grandmother Cecile’s handwritings, and the names of many known or known-of family members and friends. It was an emotional encounter with the pages of the book. There were inscriptions from Nelly’s teachers and school friends; she had kept in touch with some of them throughout her life. Photographs of Nelly and her family through the years. Courtesy the Weiss family.

Entries from Nelly’s parents mark the occasion of her seventh birthday on 5 September 1936. Her father wrote, “Be sure I will forever watch over your future.”

Her mother penned a rhyming poem,

“I was with you many nights, did you not recognise me?
Watched over your sleep, and quietly held your hand!
I listened to your breathing, hour after hour.
So my quiet word became a song and I sang 1000 times
It carries on with yourself and I hear it’s still.
And you who brought life to me, in our Land of Loneliness!
Do you know the dream of the quiet night?
Say, did you recognise me? Your Mami”

The words capture their dreams and hopes for their daughter.

The content of other entries reveals a somewhat stark contrast between the intensity of the messages written in German, and the more light-hearted messages in English from Nelly’s Australian friends.

Compare the September 1936 Berlin entry from Erika and her mother Irene Loebl, “Staying alive in spite of all evil, the god will come to help you (Goethe)” or the February 1938 entry from Henny, “Love Goodness! Hate Evil!”, to the April 1940 message from Dulcie in Sydney, “Nelly and a monkey sitting on a rail, now who could tell the difference if Nelly had a tail.”

Some of the sayings and rhymes on the pages are typically found within such autograph books: “Where there’s a will there’s a way”; “Love my friends love my foe”; “This world that we’re always in, is very hard to beat, you find thorns on every rose, but aren’t the roses sweet.” The entries trace the journey of a young girl from her home in Berlin – where the tensions of living under the Nazi regime seep into the sentiments of the book, to the freedom of her new home in Australia.

Nelly passed away on Anzac Day, 25 April 2018, sadly never having been reunited with her childhood book. She was survived by her husband, David, her three children and eight grandchildren. However, her voice and that of her mothers have been immortalised in a musical composition by one of her grandsons, Sam Weiss. Sam was especially touched by his great grandmother’s poem to his grandmother. In a composition titled Deine Mami (Your Mother), her words are performed by the Sydney Children’s Choir. Though the singers may not understand the language, the sentiments resonate strongly for them. 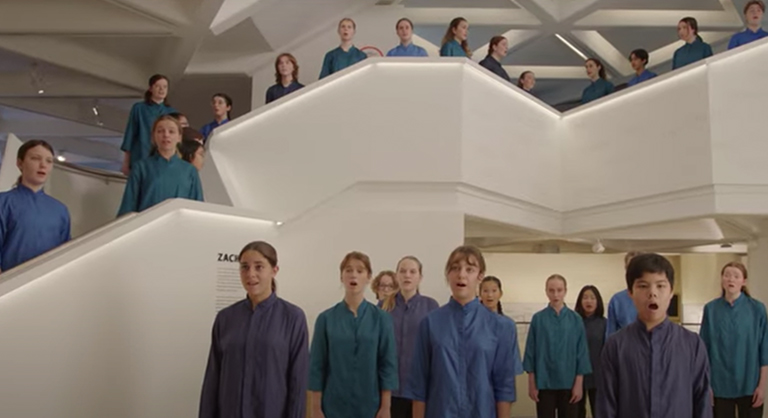 Deine Mami has come to represent the autograph book, its connection to one Jewish family and its resonance beyond – linking with those forced to escape their homes for the dreams and hopes of an unknown and uncertain future. The composition is a bold and creative interpretation of a Sydney Jewish Museum artefact.