It was spring, the scent of flowering linden trees wafted in the air, the bank of a river, my nanny and my stroller. These were my first memories.

Maximillian “Max” Hennar embodies the ideal that we are students for life. An engineer, a musician, and now an aspiring physicist and philosopher, Max has continued his studies and passions as he eclipses his 100th birthday this year.

To hear him speak with vigour on topics of Einstein and general relativity, to his philosophical musings on the origins of music from an evolutionary standpoint is not just a testament to man of 100, but an achievement at any age.

Due to a pandemic, we are encouraged to learn an instrument, learn a language, study a new field, but Max proves differently. Opportunities to better yourself don’t arrive at specific moments, but rather they are constantly there, waiting for us to grasp them. 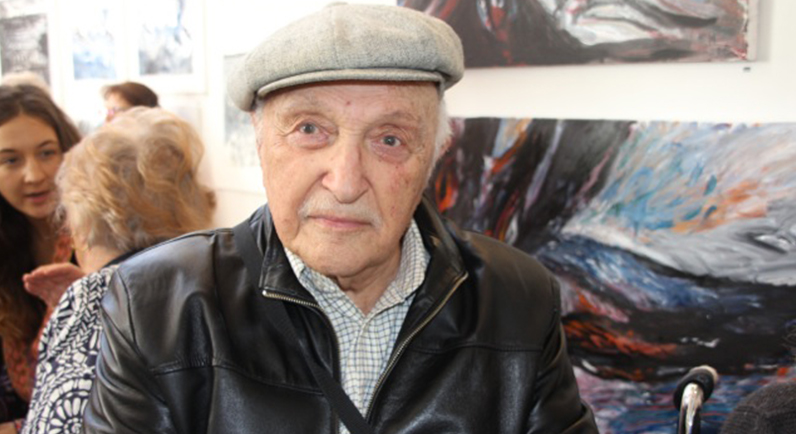 The impressive life of Max Hennar did not begin at 100, but rather began in the town of Przemsyl in Poland. Born in a Jewish family as the youngest of five brothers, Max began his learning at the dinner table, hearing stories and interests from his much older brothers. He developed a love of technical interests from Janek, and Oles (Alexander) leaving him with an interest in nature and the animal world.

Unlike his brothers, Max was never afforded the opportunity for university education, as his parents understood the then current economic status in Poland, and felt it better Max learn a technical skill or trade. The rising antisemitism at the time as well did not fill Max’s parents with confidence either. At 14 Max was enrolled at the National School of Construction 30km away from Przemsyl in Jaroslaw, wherein he would stay for the duration of the 4 year diploma. Unable to go to University combined with the sale of the family piano was an emotional blow, but Max made the best of his situation. The final project for his diploma was the construction of a town hall for a town of 20,000 people.

Following the 1939 invasion of Poland by Germany, Max moved to the town of Lvov (now Lviv), where he would work as a technical officer with a Soviet building company. Despite his brother Janek also working in Lvov, there was much work to be done and therefore little time to see one another. Max used this time constructively, enrolling in the Polytechnic University and learning in the Civil Engineering faculty. The stay in Lvov was brief, as in 1941 along with the outbreak of the Soviet-German war, Max was evacuated to Kiev and the USSR, where his Civil Engineering and construction background proved an asset. The departure to the USSR was a blessing for Max, as he escaped many of the tragedies that befell his family and the potential for being caught up in the decimation of the Jews of Poland.

At 22 years old, Max was asked to lead the construction of a bridge across the river Tyereshka, in which his mastery of the Russian language aided him greatly. The bridge was to be built outside of Czerkasskoye, in which Max was made the manager of the roads depot, and responsible for the roads themselves. Max would volunteer to join a newly constructed Polish Army under Soviet control on condition that the bridge was completed. This provided an opportunity not just for Max to return to Poland, but to be reunited with his brother Janek. During their time with the Polish Army, Max and Janek were stationed in the liberated concentration camp of Majdanek, near Lublin in the South East of Poland. Seeing what had become of his people took a toll on Max, as it took years for his anger at the Germans to subside. Although whilst the anger may have dissipated, the memories and the dreams of what he witnessed are not as quick to leave.

Following the end of the war, Max returned to Warsaw with his brother Janek. The two were afforded the opportunity to seek out what had become of their parents and older brother Edward who remained in the Lvov Ghetto. Here the two brothers learned that their family who remained in Poland were murdered as they attempted an escape to the nearby woods. Of the 5 brothers only 2 survived after the Holocaust. One joined the International Brigade in Spain and perished fighting the German-Italian fascist intervention.

Upon his return to Warsaw, Max found his greatest asset wasn’t his technical skills which afforded him a position in the Polish Railway authority, but rather his musical prowess. Jadzia was the darling of her workplace in the Ministry of Industry and had a beautiful singing voice which required accompaniment. Max would play piano during the rehearsals and then share his bike for the ride home as the two lived quite comfortably. In Max’s own words, “the handlebars must have been very uncomfortable but she was smiling the whole time.”

The time spent in Warsaw was not just work, but also further education for Max at the Electrical Faculty of the Warsaw Polytechnic as he looked to improve his skills. The thirst for learning did not stop there, as in 1946, Max simultaneously enrolled in the Academy of Mining in Krakow, majoring in the Railway Division. For his masters degree and diploma project, Max worked on the electrification of the railway between Gdansk and Gdynia. This was followed by a PhD at the Polish Academy of Science. Although with the expansion of the USSR’s influence during the 1950’s, Max and Jadzia decided it was best to immigrate to Australia, as growing concerns for the economic wellbeing under the Communist regime were well founded. The two looked to avoid the embers of Anti-Semitism still remaining after the war.

One of Max’s first jobs was preventing corrosion caused by electrolysis in electric and telephone cables with the Railway Department in Sydney. Although the science of electrolysis is lost on us, Max to this day can provide a better explanation of these terms that most science teachers we know! Although this is not to say the job search was easy, as Max spent most nights upon arrival learning English to help him not just in the employment sector, but socially day to day as well. Max and Jadzia helped expose many traditional Polish and Jewish dishes to their neighbour living all over Sydney. In 1981, the couple bought their dream property in Balmoral, getting to live out the Australian dream of living by the ocean.

Max’s love of music and the piano inspired him to help create the Chopin Society of NSW, a group which now boasts over 200 members. Max would help in setting up private showcases of internationally eminent pianists in creating a cultural exchange between the Australian, Polish and International communities. This revolved around a shared love for music, and the joy that it has brought Max and his family over the years.

Currently, Max continues his learning online, where he has access to vast libraries of encyclopaedias covering all topics and satiating the desire to learn more. Hearing him speak now is an opportunity to learn from a mind that has only improved due to his age. We certainly all hope to be as well read as Max when we reach 100.