Shining light on the chanukiah from Theresienstadt

This chanukiah was used by Rosalie and Ernst Salm to celebrate the festival of Chanukah, during the three years they were incarcerated in the Theresienstadt.

It appears to have been made by hand from a low-grade metal; there are no distinctive marks from the chanukiah’s maker, though it was created by inmates within the walls of the ghetto-concentration camp. 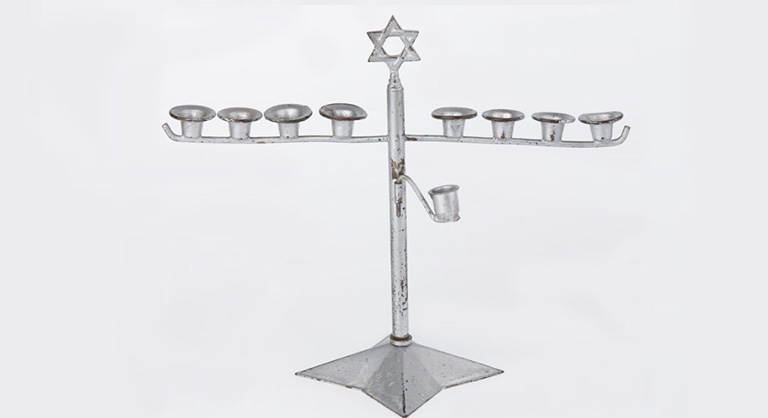 Rosalie and Ernst Salm were deported to Theresienstadt together with Rosalie’s sister, Julie, and their mother, Helene. Helene died in Theresienstadt in August 1943, and Julie was deported to Auschwitz in October 1944 where she was murdered.

Both Rosalie and Ernst survived the war. Ernst died in 1949 and Rosalie in 1964. They are buried in the Jewish cemetery in Trier, Germany.

The chanukiah was inherited by their daughter, Ruth, who immigrated to Australia in 1938, before the war, under the sponsorship of the Australian Jewish Welfare Society at the age of 18. Ruth passed away in 1983 and the menorah was donated to the Museum in 1991 by her husband.

A symbol of light

Chanukah celebrates the Maccabean victory over Greek tyranny in the second century BCE, the re-establishment of Jewish sovereignty, and the miracle of light.

A handmade chanukiah alight in the ghetto and concentration camp of Theresienstadt can be viewed as an act of resistance and resilience, which takes on special significance in the context of Chanukah.

On display in the ‘Amidah’ section of the Museum’s Holocaust exhibition, alongside other examples of Jews ‘standing up’ against Nazi persecution, the Theresienstadt chanukiah is a powerful symbol of light, amid the darkness.