Perspectives on the liberation of Bergen-Belsen

When Bergen-Belsen was liberated on 15 April 1945, a horrific landscape of death and suffering was revealed. News reels, photographs and sketches showed indescribable horrors. Bergen-Belsen emerged in 1945 as a symbol of Nazi terror and the Holocaust. On this day, the 75th anniversary of liberation, we delve into the history of this concentration camp from the perspective of a Belsen victim, liberator, relief worker and war artist.

The camp at Bergen-Belsen was established in 1940 at the outskirts of Bergen, a small village between the North German cities of Celle and Hannover. Until April 1943, Bergen-Belsen was exclusively a prisoner-of-war camp. After this time a portion was converted first into a civilian residence camp and, later, into a concentration camp; the “prisoners’ camp”.

As Allied and Soviet forces advanced into Germany in late 1944 and early 1945, Bergen-Belsen became a collection point for Jewish prisoners evacuated from other camps closer to the front. Tens of thousands of new prisoners, many of them survivors of ‘death marches’, overwhelmed the already insufficient resources of the camp and vastly increased the outbreak of diseases. It was in this way that Olga Horak (nee Rosenberger) came to Belsen. Olga and her mother survived Auschwitz, a work camp in Germany, and three death marches to Gross Rosen, Dresden and finally Bergen-Belsen. By April 1945, Olga was near death with Typhus and starvation, weighing only 29 kilograms.

Bergen-Belsen was not the first concentration camp to be liberated, but in most major camps thus far attempts had been made by the SS to destroy the evidence and liquidate most prisoners. For example, when Auschwitz was liberated in January 1945 only 6,000 survivors remained. By the time British and Canadian forces entered Bergen-Belsen on 15 April 1945, there were 60,000 people starving, sick and dying in the camp. One of these British Soldiers was Harry Wigglesworth, who recalled that the liberation forces were unaware of what would confront them at Bergen-Belsen when they arrived. Even before entering, Harry was taken aback by the “terrible smell,” which lingered in the air around the clock. “The piles that I saw had hundreds of bodies on them… The piles that I saw were just remnants of what was left, the bodies that they couldn’t get rid of before we got there. It was shocking.” 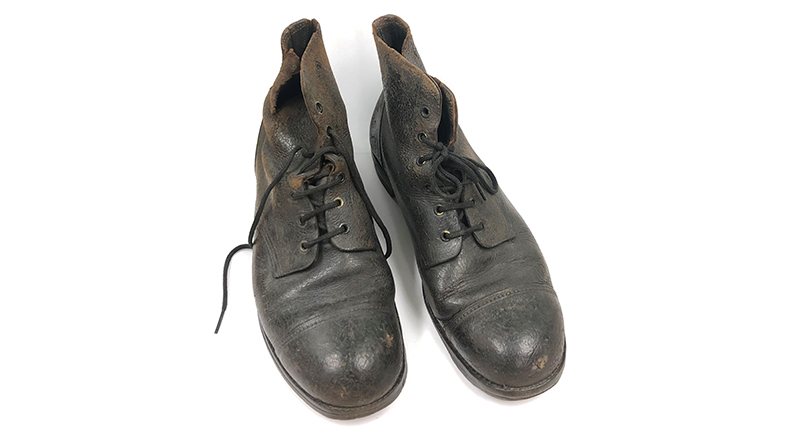 Army boots worn by Harry Wigglesworth who served in the British Army from 1939-1946. SJM Collection.

Thousands of unburied bodies lay strewn on the ground, some of them living skeletons who were near indistinguishable from the dead around them. Olga had been lying in a group of dead bodies, half frozen, half dead. A blanket was thrown over her skeleton like body by someone that Olga knew from her hometown, Etta, a Kapo from Auschwitz who arrived in Bergen-Belsen when Auschwitz was liquidated. The meagre warmth it provided likely saved her life, when thousands of others continued to die after liberation day. “People did not know how to respond; some laughed, some cried, some screamed.  It should have been a happy day but for me it was one of the saddest. Tragically my mother died that day while standing at a table, waiting to get a displaced person’s card.  They carried her out on a stretcher and I never saw her again. I was determined to survive in order to bear witness.” 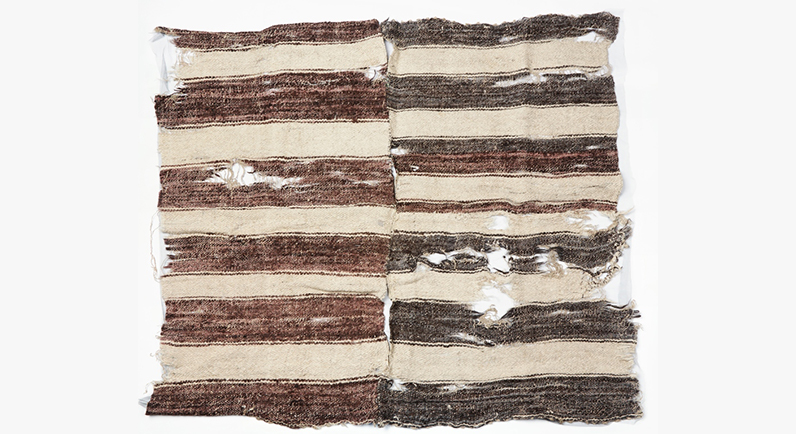 To prevent the spread of typhus and other diseases, Allied medical staff provided much needed resources in their attempts to help the wasted survivors. Australian nurse Muriel Knox-Doherty was posted to Bergen-Belsen in 1945 to help in the rehabilitation efforts. Arriving on 11 July, three months after liberation, she was appointed Chief Nurse and Principal Matron to Bergen-Belsen and faced the enormous task of establishing a hospital and nursing the thousands of survivors. Doherty was an avid and meticulous recorder of all that she saw and did. During her stay at Bergen-Belsen she kept a detailed diary and wrote weekly letters to her mother and friends, often by candlelight, providing invaluable insight into the conditions at the camp and offering a woman’s perspective on war. In one of these letters written on 27 July 1945 (now in the Mitchell Library collection), Muriel described the shocking result of tens of thousands suffering from typhus, diarrhoea and pulmonary tuberculosis in advanced stages: “Excreta was everywhere. Faeces were 6 inches deep on the floor of the huts… The walls were heavily coated also. Thousands were too ill to move. Those living in the lower of the tiered bunks had no protection from the excreta dripping from above. Lice was everywhere. Filth, stench, decomposition…” In conditions like these, for too many inmates their systematic deprivation and maltreatment was beyond help. Some 15,000 inmates perished after liberation. 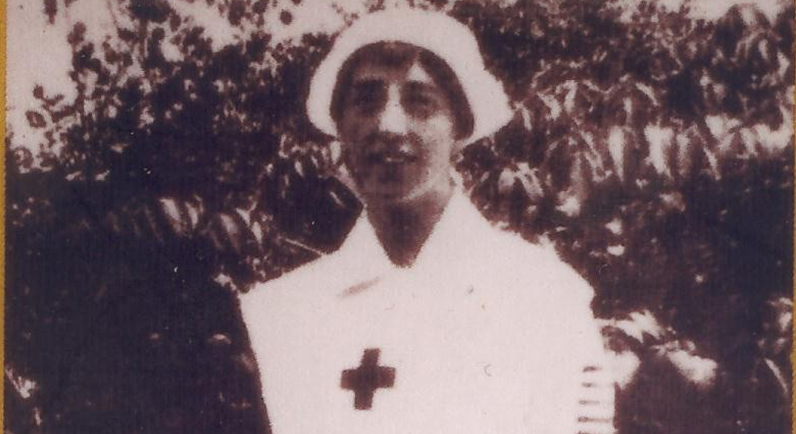 Camp guards were organised by the British to remove the corpses (work that had previously been forced on the starved inmates). Mass burials were necessary because of the huge numbers of bodies and the dire risk of disease. Eventually it was realised that the bodies were not being buried fast enough as thousands more died, so bulldozers were employed to push hundreds at a time into pits.

Army film and photographic units were posted to Bergen-Belsen to record these terrible scenes. The photographer, Australian official war artist Lieutenant Alan Moore was attached to this British unit as it advanced across occupied Europe. Whilst at Belsen, Moore made several paintings, sketches and drawings as a record of Nazi atrocities committed against the predominantly Jewish inmates. A personal camera was also used to record events observed in the Allied occupation of the camp. “I was drawing madly. It was one of the pits where we got the SS to get bodies out and bury them quickly, otherwise plague would set in. One of the troops said, ‘You’re mad doing that, people will think that you’ve just made it up’. He said, ‘Why don’t you take a roll of snaps’. I took a roll of 35mm photographs, which I’ve still got. They show everything that was there.” 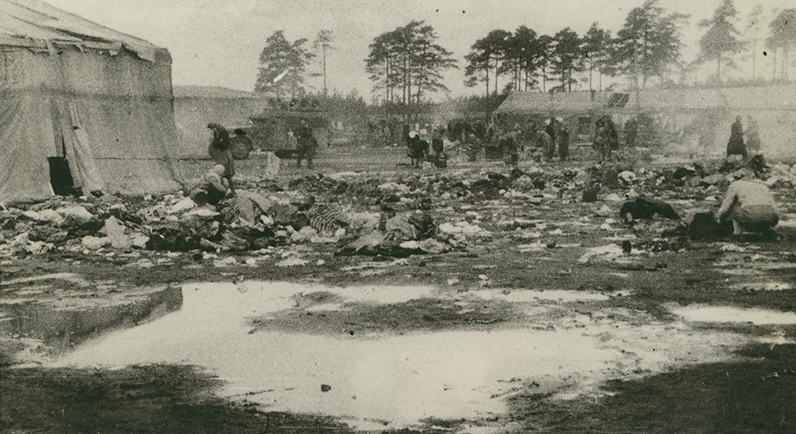 The film taken during the liberation and relief of Bergen-Belsen was used in the Belsen war crimes trial at Lüneburg in September 1945. A compilation, supported by affidavits from the Sergeant Cameramen, was screened in the courtroom. This evidence and the experiences of those involved in the relief of Bergen-Belsen had a defining impact on the public psyche regarding Jews and the Holocaust.