A lamp with no shade

In 2018, we received a donation of a weird but wonderful hand-carved lampstand.

It features a moose standing beside a tree stump. The base of the item is carved with the inscription: ‘Lithuanian DPs Handwork Scheinfeld 12 April 1947’.

We know little about the maker, aside from the fact that they were a Lithuanian displaced person in a DP camp in Germany. Though, we do know that the lamp was gifted to an Australian Major named Eric Cummings as a memento of gratitude, at a time where there were an estimated nine million displaced persons in newly liberated Europe. 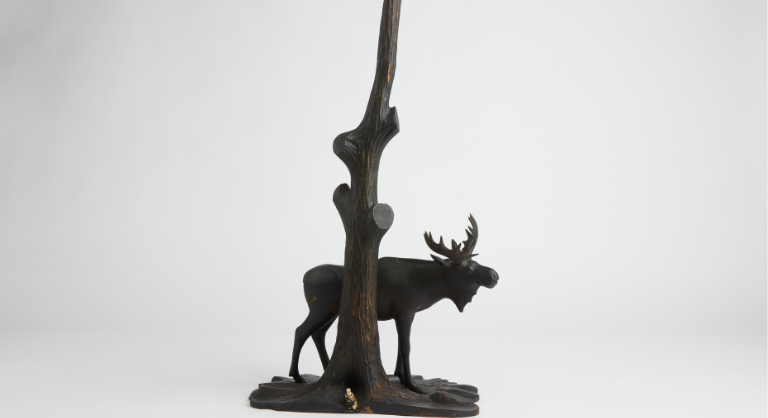 After liberation in 1945, displaced persons camps, or DP camps, were established on the sites of former concentration camps, barracks, summer camps, and other temporary structures. Originally administered by Allied military personnel, responsibility for running the camps was soon transferred to United Nations Relief and Rehabilitation Administration (UNRRA), and in 1947 to the International Refugee Organization (IRO).

The DP camps, referred to by inmates as ‘waiting rooms’ – while they waited to return home or find a country to take them in – quickly developed into centres of regeneration and rehabilitation.

As physical recovery and healing took place, survivors began to acquire new skills and spend their time productively. Those hoping to migrate to Palestine learned Hebrew. They made souvenirs and mementos and earned diplomas as tailors, seamstresses, mechanics, electricians, and welders. Scheinfeld, the maker of this lamp, was taught wood carving.

How the lamp reached Australia

Major Cummings, the person to whom the lamp was gifted, was employed by the UNRRA. He was stationed in Germany from 1945-1947. In a book written by I.F. Stone ‘Underground to Palestine and Reflections Thirty Years Later’, Stone recalled his encounter with Cummings in Fürth DP camp. He spoke of Cummings as a ‘stocky, but dapper Australian’ who was particularly ‘fatherly’ toward the camp’s inhabitants.

After enlisting in the Australian Imperial Forces, during World War I served in the Gallipoli campaign. In June 1940, 44-year-old Eric Cummings returned to active service. In 1945, he joined the UNRRA, working as the director in charge of displaced persons camps in West Germany.

After the war, he returned to Australia, where he received a Distinguished Flying Cross for his bravery – having undertaken several air raids against Manfred von Richthofen. He lived with his wife, Carin, in Sydney and passed away in 2015. After his death, the lamp was bequeathed by Eric’s wife to Nancy and Peter Lefmann, who are the donors of this item.

You are not likely to see moose in Australia as they suffer heat stress at high temperatures. You will, however, find our moose lamp in our cool temperature-controlled archives.